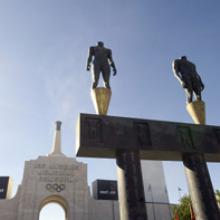 A taxpayer lawsuit was filed Wednesday against the city of Los Angeles alleging an unlawful "gift of public funds" to the Los Angeles Rams in the form of security at home games.

The lawsuit was filed by former City Councilman Dennis Zine and Los Angeles resident James Bibeau "to prevent the city from expending any additional taxpayer funds to provide over 200 LAPD officers free of charge to secure Rams home games," according to the Los Angeles Police Protective League, the union that represents LAPD officers and has been pushing the team to pony up money for security costs.

"Rams owner Stan Kroenke has refused to pay in full for the police services necessary to ensure public safety at his team's home games," according to the union. "This free use of LAPD personnel constitutes an illegal gift of $2 million in public funds."

The Rams declined to comment on the suit Wednesday. There was no immediate response from the city, but Mayor Eric Garcetti said earlier that the team should help cover policing expenses.

"For these next three years, we are asking the Rams to help cover the cost of policing around the stadium - because we want to be absolutely certain that there will always be enough officers available to do the everyday job that our communities need and deserve," Garcetti said. "I expect this to be resolved in partnership with the Rams, and done in a way that keeps our neighborhoods safe and minimizes the cost to taxpayers."

The Rams fund security inside Los Angeles Memorial Coliseum during home games, but negotiations are still continuing with the city over the cost of police services outside the stadium. Officials said two meetings on the topic are scheduled for early next week in hopes of reaching an agreement before the Rams' next game on Sept. 18.

The LAPPL has estimated that the security will cost the city about $2 million a year, with more than 200 officers needed at each game.

Earlier this month, the Rams issued a statement on the general topic of security saying the team is "working with the LAPD to find solutions that work for everyone - in fact, we have a few meetings already scheduled with LAPD and USC leadership in the coming weeks."

"The safety of fans attending our games is a priority and we are appreciative of the great team at LAPD and other agencies that will be part of our game-day security operation for helping ensure a safe environment for our guests," the Rams statement said.

The letter went on to say "it is imperative that the costs be fully covered and that only off-duty officers be employed."

O'Farrell also introduced a motion calling for a report from the LAPD on the impact Rams games at the Coliseum will have on the department's deployment across the city, specifically "if deploying officers to cover football games will have an effect on response times for residents in other parts of the city, and on the cost of deploying officers to cover games at the Coliseum."