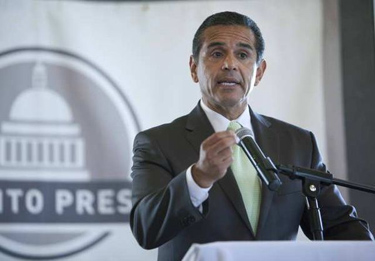 Los Angeles City Hall's recently heralded plan to right its finances -- and rein in soaring retirement outlays for cops and firefighters -- has been thrown into jeopardy.

Faced with spiraling pension costs, Los Angeles Mayor Antonio Villaraigosa and the City Council moved this summer to freeze the amount of healthcare benefits given to thousands of cops and firefighters once they retire. Those benefits would not increase in coming years, Villaraigosa said, unless employees contributed more toward retirement from their paychecks.

That arrangement was designed to save the city $44 million this year. But in a reminder of the risks faced by local agencies when they tinker with pension benefits, a law firm retained by the city's Fire and Police Pensions board concluded this month that those health benefits were already guaranteed -- and that the city has an obligation to cover the cost of rising healthcare premiums.

Since the opinion was released, at least one pension board member has called for a lawsuit challenging the city's decision to freeze monthly medical benefits for retirees. Meanwhile, civilian city employees are demanding a legal opinion on whether they too should be spared from limits on their retiree health benefits.

The city's decision to cap the monthly medical subsidy was the single biggest step toward balancing this year's budget, saving $100 million this year once civilian workers are included, said City Administrative Officer Miguel Santana. The city's top budget official, Santana said the mayor and the council had "every right" to freeze the healthcare benefit at the existing level. "We committed to a majority of workers that if they want that benefit to grow with inflation, then they need to start contributing," he said.

"If anyone is successful in asserting that the city has no right to receive this contribution from its employees ... what's put at risk is $100 million for this fiscal year," he added.

The city's bargaining committee, which is made up of Villaraigosa and four council members, went behind closed doors Tuesday to discuss the legal opinion. That panel secured its own written legal advice, from a different law firm, saying the city was on the solid legal ground when it imposed new limits on retiree health benefits.

Villaraigosa described the arguments set out in the pension board's legal opinion as "absolutely ludicrous and untenable."

"I believe we're absolutely on strong legal ground," he said.

Pension and retirement costs have been steadily rising in recent years, consuming $769 million of this year's general fund budget, which pays for basic services such as parks and public safety. Retired police officers and firefighters each currently receive a monthly healthcare subsidy of $1,097 a month. That is enough to cover a monthly premium for two people enrolled in either Kaiser or a Blue Cross HMO, according to figures provided by Santana's office.

The subsidy has been increased on a yearly basis since 1975. But under the city's plan it will no longer rise with inflation unless individual police officers and firefighters pay an extra 2% of their salaries toward their retirement.

The deadline for police and firefighters to decide whether to pay more is Thursday. Fire and Police Pensions board member George Aliano, a retired cop, said employees should not have to pay that amount, based on the opinion his agency received.

Aliano also said city leaders should not have put public safety workers in the difficult position of having to decide what to do when the legal issues remain unresolved.

"They've gotten themselves in a mess. Because if they lose [in court], they have to stop everything -- stop the people from paying the 2%, and give back money to the people who paid the 2%," he said.