Skip to main content
11
Jan 2012
In light of police deaths, training is scrutinized 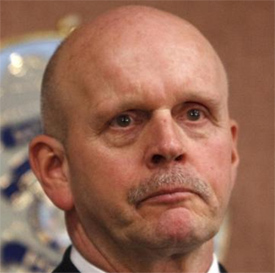 Odgen Police Chief Wayne Tarwater addresses the media following an incident in which one officer was killed and five others were wounded when they attempted to serve a drug-related search warrant in Ogden. (Leah Hogsten, AP)

The recent surge in fatal police shootings is weighing heavily on law enforcement trainers, some of whom are calling for a reassessment of high-risk fugitive and drug raids that have resulted in a number of deadly ambushes.

"It's time to change our thinking," says Pat McCarthy, who advises police agencies across the country. "Cops are exposing themselves to increasing danger many times over, and it's just not necessary."

Harvey Hedden, executive director of the International Law Enforcement Trainers and Educators Association, said the group is urging its 4,000 members to "look at everything" in an effort to avoid potentially dangerous complacency on the streets.

"Police work can be 99% boredom and 1% panic," Hedden said. "Routine can be the most dangerous of all. We need to go back to the basics."

Federal and local officials have been troubled for the past two years by the number of firearms-related fatalities. Gun-related fatalities last year were up 15% from 2010. So far in 2012, four officers have been killed by gunfire - one more than at the same time in 2011.

Last week, in the most violent episode of the new year, one Utah officer was killed and five others were wounded when they attempted to serve a drug-related search warrant in Ogden.

The officers, members of a narcotics strike force, were met at the door by a former soldier, who allegedly opened fire on the squad, killing 30-year-old Ogden officer Jared Francom. The suspect, Matthew Stewart, 37, was wounded in the confrontation. His injuries are not considered life-threatening.

Weber County Sheriff Terry Thompson said that the incident and the officers' actions remained under investigation and that the activities of the strike force are "on hold" because about half of the unit was involved in the shooting.

McCarthy said the deadly confrontation underscores a need for police to rethink their tactics.

"The days of knocking down doors in drug cases should be over. Given what's going on now, you have to consider other options," McCarthy said.

He said law enforcement officials should focus more on attempting to lure suspects out into the open or simply "wait them out."

Of the 68 firearm-related fatalities last year, a Justice Department review found that at least 10 officers died while serving search warrants or participating in multiagency raids.

Later this month, the Justice Department is hosting a meeting of researchers and law enforcement officials to discuss tactics and training in the wake of the officer deaths.

"You can have all of the equipment in the world, but if somebody wants to kill you, they will if you give them the opportunity," he said.