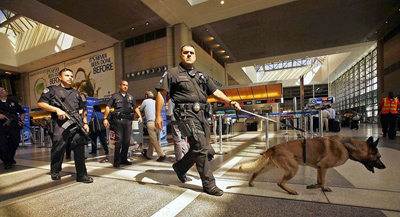 Law enforcement agencies in and around Los Angeles on Monday boosted patrols of locations that are potentially attractive to terrorists, sent bomb-sniffing dogs into train stations, and monitored local sales of ammunition and chemicals in the wake of the killing of Osama bin Laden by U.S. forces.

Law enforcement officials emphasized that there had been no indication of a specific threat or suspicious activity, but said they were taking no chances.

Michael Downing, commanding officer of LAPD's Counter-Terrorism and Special Operations Bureau, in a memo to other department officials, warned of an increased threat of a terrorist attack.

"This threat could come in the form of surprise attacks by homegrown violent extremists who, while not previously mobilized for violence, now find justification to mobilize and commit violent acts against innocent civilians or government institutions," he wrote.

On Monday, members of Downing's team took part in a classified video conference with FBI field offices to discuss the response to the Bin Laden killing, according to Downing's memo, which was reviewed by The Times. The LAPD is included in such discussions as part of its membership in a regional, multi-agency task force established to gather and disseminate intelligence on possible terrorist activity.

In setting their plans in motion, local law enforcement officials relied heavily on the day-to-day work that counterterrorism officers have been doing for years, they said.

A long-running component of the LAPD's counterterrorism program, for example, has been Operation Archangel, which focuses on identifying potential terrorism targets throughout the city, developing security for them and devising plans to be used in the event of an attack. The information already gathered on those locations, which include the downtown U.S. Bank Tower and other commercial hubs, Staples Center and tourist attractions such as Universal CityWalk, were being disseminated to area police stations Monday, Downing's memo said.

Officials also urged members of the public to watch for unusual activity.

"Be vigilant about things that don't fit," LAPD Chief Charlie Beck said at a news conference Monday, which was also attended by Sheriff Lee Baca and representatives from other agencies. "Don't worry about what the information is.... We'll figure that out for you."

Officials underscored the delicate line that law enforcement officers were treading as they tried to ensure that heightened vigilance does not blur into harassment or violence against local Muslims. They called on the public to watch for activity that seemed out of the ordinary, such as unfamiliar vehicles left unattended or stockpiles of chemicals, but cautioned that a person's religious garb or other aspects of someone's appearance were not grounds for suspicion.

"Terrorism is not limited to a certain kind of people," said Sheriff's Sgt. Mike Abdeen, head of Baca's Muslim Community Affairs Unit, a fulltime outreach group. "The way we look at terrorism, everybody is a potential suspect regardless of race, ethnic background, religion."