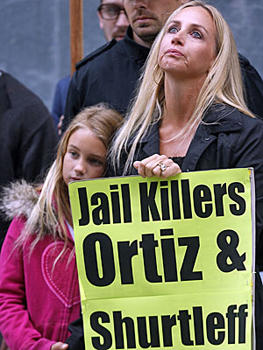 Eden Biele, with daughter Cirrafina, appears at a November news conference urging a federal probe in the shooting of her brother Douglas Zerby, who was shot by police who thought he was holding a gun. (Luis Sinco / Los Angeles Times)

Echoing arguments that have repeatedly been made in Southern California courts in recent years, a city, its police union and a newspaper sparred before an appellate panel Thursday over whether the name of an officer involved in a fatal shooting was public information.

In arguments before the 2nd District Court of Appeal, the city of Long Beach and the Long Beach Police Officers' Assn. asked justices to overturn a Los Angeles County Superior Court ruling that the city must respond to a newspaper's request for the officers' identities. They each argued the names were protected personnel information and that releasing them would jeopardize officer safety.

Similar arguments have been made unsuccessfully in recent years by unions representing the Pasadena police and the L.A. County Sheriff's Department, in cases seeking to bar the naming of officers who had shot and killed people.

The Los Angeles Times filed a public records request in the Long Beach case after the December 2010 shooting of a man holding a garden hose nozzle, which officers mistook for a gun. The paper also asked for names of all officers involved in shootings since 2005.

The 2010 shooting sparked criticism and widespread media coverage but was found to be justified by the district attorney's office. Names of the officers involved in that shooting were made public last November in a district attorney's letter detailing the findings of its investigation. The letter concluded that Officers Victor Ortiz and Jeffrey Shurtleff had acted in self defense and in the defense of others in the shooting, noting that the nozzle was "black and brass colored" and "quite similar to the physical appearance of an actual firearm."

An attorney for The Times contended Thursday that Long Beach and the union, although separate parties to the lawsuit, were "colluding" to skirt the city's obligation under public records laws and indefinitely keep secret the identities of law enforcement officers who had exercised lethal force.

Kelli Sager, arguing for the newspaper, said The Times was not seeking disciplinary or investigative records, but simply asking to find out which officers had shot and killed citizens. The information, she said, was a matter of vital public interest necessary to hold law enforcement accountable.

The city's argument that an officer's involvement in a particular incident is protected personnel information would mean that virtually no information about police activities could be released, Sager said. By that logic, she argued, "you couldn't say an officer appeared at a kindergarten to talk to students."

Justice Kathryn Doi-Todd asked an attorney representing Long Beach if the city's reading of state law was "expanding the concept of personnel records."

Christina Checel, representing the city, said it was not. She argued that because of the city's policy of automatically launching an investigation of each officer-involved critical incident, the information sought by The Times was always part of personnel records.

An attorney for the union asked the three-justice panel to focus on the officers' safety.

"You must not forget as judges what you know as human beings ... there is a danger and likelihood of retaliation for officers involved in shootings," said Larry Roberts, representing the officers' association.

Sager countered that even though officers' names had been released in the 2010 shooting, neither the city nor the union had offered any proof that the officers had been endangered as a result.

"Was their safety imperiled? There isn't a peep about that from the other side," she said.

The panel is expected to issue a decision in 90 days.