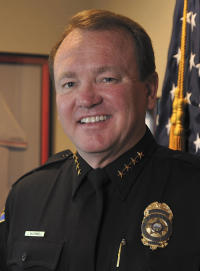 LONG BEACH - The city's No. 1 cop, who once rose to second-in-command in the Los Angeles Police Department, may now be setting his sights even higher in a bid for Los Angeles County sheriff.

"When I was on the jail commission, a few people reached out and asked 'Would you be interested in running for Sheriff,"' Long Beach Police Chief Jim McDonnell said Tuesday. "I'm still not certain what I will do, ... but it's an honor to be thought of."

Running for sheriff is a major undertaking, with the odds set steeply against anyone who tries to unseat incumbent Sheriff Lee Baca, McDonnell and others said.

But with Baca coming under heavy criticism in the past year over the condition of the county jail system, including the number of use-of-force incidents, as well as issues within his own command staff, and his seat up for election next year, McDonnell said now may be the time to consider a jump from Long Beach to Los Angeles County.

McDonnell also served on the Citizens' Commission on Jail Violence, which in September issued a searing indictment of Baca, blaming his "failure of leadership" for deputies engaging in a pattern of excessive use of force against inmates. The commission urged sweeping reforms of the jail system.

McDonnell said changes could be made throughout the Sheriff's Department.

"They are a large agency, the challenges that they are facing are immense," McDonnell said. "It's certainly an opportunity for someone with fresh eyes to come in and modify, to make some changes for the department and the community it serves," McDonnell said.

Though he is still discussing the possibility with his family, the decision will likely have to be made within the next month, McDonnell said.

"My goal, if I do decide to run, is to consider working here as chief of Long Beach and working weekends and nights on campaigning."

No matter where he works, McDonnell added, he will remain a resident of Long Beach.

"It's where we've raised our daughters, it's our home," he said.

Many of the officers in McDonnell's command ranks said they were aware McDonnell was thinking about the move, but nearly as many of the rank-and-file were surprised by the news Tuesday. The reaction was overwhelmingly positive, with officers working in patrol and detective divisions saying they understand why McDonnell would want a shot at the single largest sheriff's department in the country, though it would be a loss for Long Beach.

"I'm honored that that's the reaction and encouraged by it. We have a great organization here," McDonnell said. "I would put this team up against any as far as what they contribute to the community from a public safety standpoint."

Long Beach Police Officers Association Steve James said he was among those who knew as early as January that McDonnell was considering the bid for Sheriff.

McDonnell said that though he was tapped by "interested parties" in the county who wanted to know if he would consider a run against Baca when he was serving on the jail commission, that interest grew significantly in the past month.

"I think timing is everything," James said. "I think that the position is up in 2014. It's the type of position that takes probably a good year to run for. I don't think he wants to leave Long Beach ... I think it's an opportunity for a personal and professional challenge.

"It's a potential opportunity that not many people in our profession have. ... It's one of the best law enforcement jobs in the country."

Baca's spokesman, Steve Whitmore, said Tuesday that Baca likes McDonnell but the Sheriff doesn't see the Long Beach police chief, or any other candidate, as a threat to his re-election.

Baca, Whitmore added, listened to the criticism of many in the region and brought out sweeping changes and reform within the Sheriff's Department command staff and its jail system.

The sheriff, who begins every morning with an 8- to 10-mile run, has spent nearly 50 years in the Sheriff's Department.

It's a difficult job, considering the sheer logistics involved in running a department that has about the same number of sworn officers as the LAPD, Whitmore said. It is responsible not only for policing unincorporated areas of the county and many contract cities, but also running the county jail system, staffing all of the Los Angeles County Superior Courts - the largest court system in the US - and patrolling all Metro train lines and stations, Whitmore said.

James said Baca's reaction could be read otherwise, noting those running for office who are not concerned with challengers don't usually bother to comment on them. The Long Beach police union president added that Baca's handling of the jail committee's criticism is something that could taint voters' views.

"(Baca) has already made public statements that ... he doesn't care whatever other people have said or what committees have found, he'll let the voters decide, which is sort of like thumbing his nose at what has been said," James said.

Whitmore bristled at that suggestion.