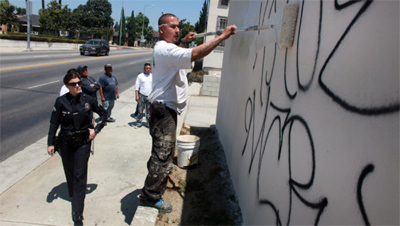 It had all the makings of another turbulent moment for the Los Angeles Police Department, an agency once notorious for an "L.A. Confidential" style of heavy-handed policing, hostile relations with minorities and corruption. Two months after triumphantly announcing the arrest of a suspect in a brutal beating at Dodger Stadium, the police admitted that they had arrested the wrong man, and charged two other people with the crime.

But unlike other potentially explosive episodes that have rocked this department over the decades, there were no indignant denials or attacks on critics. Instead, the police chief, Charlie Beck, wrote an op-ed article in The Los Angeles Times explaining what had gone wrong and expressing regret at some of his own public comments. "We can do much better," Chief Beck wrote.

The moment reflected what has been a revolution for the police department that was once the model for Sgt. Joe Friday and "Dragnet." Twenty years after the police beating of Rodney King was caught on videotape, and 10 years after the Justice Department imposed a consent decree to battle pervasive corruption in the Rampart Division, this has become a department transformed, offering itself up - in a way that not so many years ago would have been unthinkable - as a model police agency for the United States.

"It's been an amazing transformation," said John W. Mack, a former head of the Urban League who is the president of the Police Commission, the civilian board that oversees the force. "The L.A.P.D. of today is very, very different than 10, 12 years ago, when I was one of the people who was constantly battling them."

Constance Rice, a civil rights lawyer who regularly sued the department two decades ago, said, "We've gone from a state of war to becoming partners here."

The department, once widely assailed as racist, homophobic, authoritarian and corrupt, is now viewed as more friend than foe by most people in this city, including blacks and Hispanics, according to polls. A 2009 poll by The Los Angeles Times found that 8 in 10 voters strongly or somewhat approved of the performance of the department, with 76 percent of Latinos and 68 percent of blacks giving the agency positive grades; some analysts said that given the relative lack of contentious issues and the continuing drop in the crime rate, the department's approval numbers have if anything continued to improve since that time.

What is more, officials announced last month that the violent crime rate had declined 9.6 percent from last year, the ninth consecutive year of decline.

The number of homicides last year, when 297 people were killed, was the lowest since 1967, when the city was one-third smaller. "We are on track again this year to have under 300 homicides - that's a number I thought I would never see in Los Angeles," Chief Beck said.

The decline, reflecting trends in other big cities, is particularly striking in Los Angeles because of the department's troubled history and because the force, which has just under 10,000 uniformed employees, is smaller per capita than many of the nation's largest cities, including New York.

The turnaround reflects initiatives that have changed the way the department looks, how it battles crime and how it relates to the community. It reflects the considerable success of the last police chief, William J. Bratton, who took over at a time of turmoil and imposed many of the reforms that he had brought as New York's police commissioner, among them statistical models to track crime and establishing personal relationships between police officers and residents.

"Bratton took them from the police force with the biggest police corruption scandal in the country and the biggest riot in American history on its résumé to a police force that was producing declining crime, had won the confidence of a liberal police commission and won the respect of the black middle class," Ms. Rice said. "The L.A.P.D. was hated by everybody. Bratton didn't only reduce crime. He created a new policing atmosphere."

Erwin Chemerinsky, a law professor at the University of California, Irvine, who wrote a report on departmental abuses after Rampart, said, "Bratton made clear that the culture that tolerated an excess of force, where a code of silence was just pervasive, could no longer be tolerated."

Mr. Bratton, who left the force in 2009, said he found the challenges here much tougher than what he faced during two years in New York. "The N.Y.P.D. was more ready for change," he said. "The L.A.P.D. was a very proud organization, was resistant to change, very resistant to me coming in as an outsider."

The changes were apparent during a recent visit at the Southwest Division headquarters in South Central Los Angeles, long identified with gang violence.

Charts on the walls tracked, day by day and neighborhood by neighborhood, upticks in crime. Tracy A. Hauter, the senior lead officer, put on a wide pair of sunglasses and took off from roll call to spend her Sunday morning tooling from one side of her turf to the other. She visited community leaders, who ran out of their homes to greet her, gazed down alleys to check out efforts to clean up trash and graffiti and offered a running travelogue on the neighborhood.

Officer Hauter stopped at one point to issue a stern warning to two men repairing a car out on the street, in violation of the law and in defiance, she reminded them, of repeated complaints by neighbors. She pulled over a man in red - gang colors - for a quick pat-down and conversation. A crucial part of the department's success is the battle against gangs, responsible for 60 percent of homicides.

The morning roll call, which 20 years ago would have been, for the most part, a lineup of white men with military haircuts, included blacks, Latinos, Asians and women, evidence of what Mayor Antonio R. Villaraigosa described in an interview as the result of an aggressive and crucial effort to diversify the department.

Many of the changes were the result of recommendations from outside commissions and the strictures imposed in the Rampart consent decree, after dozens of officers were accused of perjury and tampering with evidence. A commission appointed after the King beating, and subsequent riots, recommended strengthening the Police Commission and imposing term limits on police commissioners.

Mr. Bratton was hired in 2002 by James K. Hahn, then the mayor, forcing out a sitting police chief - Bernard Parks - to try to get the department stabilized. "Bratton spent most of his time talking about what needed to be done to reform the L.A.P.D. and improve its image," Mr. Hahn said of their interview. "He also said, 'I can bring crime down in your city by 25 percent, and if not I'll resign.' That was an offer I could not refuse."

Rick J. Caruso, who led the Police Commission at the time, said the department was in deep despair then. "Morale was at a low point," Mr. Caruso said. "There were more officers leaving than coming in."

Joe Domanick, the associate director of the Center on the Media, Crime and Justice at John Jay College of Criminal Justice, wrote a 1994 book on the department - "To Protect and to Serve: The LAPD's Century of War in the City of Dreams" - and said that in many ways, the agency was worse than remembered.

"It had this reputation for being America's cops, which wasn't true," Mr. Domanick said. "They weren't good. It wasn't just that they were brutal and all that. They were not effective."

Mr. Domanick said he was stunned by how the department had turned around. He is now writing a sequel.