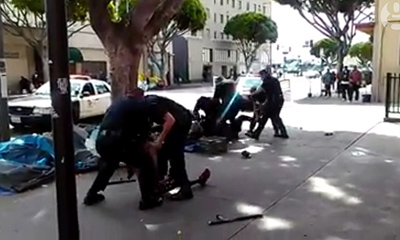 A still from the video that appears to show a man being shot by police in Los Angeles. (Photograph: Facebook)

In response to growing tensions in Los Angeles over the police killing of a homeless man on Sunday, the president of the local officers' labor union urged the public to "reserve their judgment" until an investigation was complete.

In a dramatic confrontation caught on video, five Los Angeles police department (LAPD) officers are seen scuffling with a man known as "Africa" on a sidewalk in the downtown area. Officers struggled with the man, writhing on the ground, before shooting him several times. The LAPD said the man lunged for one of the officers' guns.

Craig Lally, president of the Los Angeles Police Protective League, which represents LAPD officers, was quick to defend the officers in a statement released on Sunday.

"LAPD officers are put directly in harm's way every day as they face complex situations, unthinkable dangers and split-second decisions while protecting the residents of Los Angeles," Lally said.

"However, no officer goes to work with the intent of using force, much less deadly force. Officers may be compelled to use force when there is an objectively reasonable certainty that there could be injury to themselves or someone else. As tragic as these situations are, law enforcement officers absolutely have the right to defend their life or the life of another."

The shooting is the latest in a series of police killings of civilians which have snapped into focus seething racial tensions between law enforcement and minority communities. In LA last August, two days after an officer shot and killed the black teen Michael Brown in Ferguson, Missouri, officers shot and killed Ezell Ford, an unarmed black man who suffered from mental illness, sparking demonstrations across the city.Los Angeles police release autopsy report in shooting of Ezell FordRead more

Sergeant Barry Montgomery, an LAPD spokesman, said at a press conference on Sunday that the latest incident would be fully investigated. He said all video footage would be collected, analyzed and reviewed.

Police did not immediately identify the man, who was pronounced dead at the scene by Los Angeles fire department paramedics, the LAPD said in a statement. The man's body was then taken to Los Angeles county coroner's office.Advertisement

Though five officers are seen in the video and at least five shots can be heard, the police did not immediately release official numbers for either.

Montgomery said investigators were still looking for more video of the incident, adding that he could see at least two surveillance cameras mounted on a nearby building. The incident was also recorded by the body camera of at least one officer.

On Sunday morning, police said they received a 911 call reporting a robbery near Skid Row, an area of downtown LA where hundreds of homeless people pitch tents. Responding to the call, several officers arrived on the scene just before noon.

In the video of the incident, the officers struggle with the man as onlookers narrate the escalating situation. The man flails his arms and legs, struggling to break free, before sounds of a Taser stun gun are heard.

During the altercation, an onlooker grabs a nightstick dropped by an officer and is immediately dragged to the side and handcuffed by two officers.

A man - who appears to be one of the officers - can be heard yelling "Drop the gun, drop the gun", after which five shots are fired. The officers stand back, some with guns drawn, and the homeless man lies motionless. Onlookers gasp and shriek.

A woman who lives in an apartment nearby told the LA Times "Africa" arrived in the area about "four or five months ago". Ina Murphy said he told her he had recently been released after spending 10 years in a facility for sufferers from mental illness.

Another resident, who identified himself as Booker T Washington, told the Times police had on several occasions ordered Africa to remove his tent. The LAPD are barred from arresting residents who sleep on the streets from 9pm to 6am but in the daytime, tents are supposed to be removed.

"This man got shot over a tent," the resident said.

As with all officer-involved shootings, the LAPD's specialized Force Investigative Division will conduct a "comprehensive investigation" into the incident in coordination with the LAPD's office of inspector general. The findings will be presented the board of police commissioners to determine whether the use of deadly force was consistent with department policies and procedures.

LA-based activists have organized a protest outside LAPD headquarters on Tuesday, organizers with the Los Angeles People's Media said on Facebook.

Participants will gather at the headquarters on Tuesday morning, then collectively enter the building in order to fill out comment cards. The organizers said they expected the LAPD police chief, Charlie Beck, to be present, so they could "express [our] outrage directly to his face". By Monday morning, more than 300 people said they would attend.