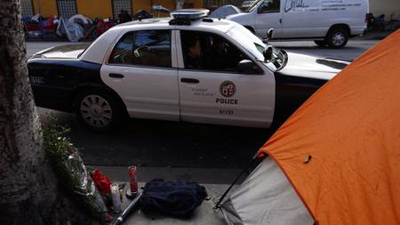 The 39-year-old man shot dead by Los Angeles police officers on skid row Sunday was convicted 15 years ago of an armed robbery at a Thousand Oaks bank and sent to federal prison, according to records and law enforcement sources.

Authorities have yet to identify the man shot by the LAPD, but two sources familiar with the investigation identified the homeless man as Charley Saturmin Robinet. So far the coroner's office has identified him only as a 39-year-old man.

In 2000, Robinet, described as a French national, was accused with others of robbing a Wells Fargo Bank branch. Authorities said at the time that when employees were slow in handing over the money, Robinet pistol-whipped one of the tellers.

He and the other suspects led police on a chase through Ventura County, where they were arrested after striking a police car and running over a spike strip. Robinet attempted to run from police after the car chase but was caught and was found to have $33,500 on him, according to prosecutors.

During his initial interviews with investigators, Robinet said he robbed the bank to cover the cost of acting classes at the Beverly Hills Playhouse, authorities said.

Federal records show he was sentenced to 15 years in prison. Robinet was released from a federal facility in May, according to online federal prison records.

The LAPD has said Sunday's shooting occurred after officers responded to a 911 call about a robbery. The department said the man fought the officers and was shot after grabbing a probationary officer's holstered pistol.

On Monday, Los Angeles police Chief Charlie Beck said footage from body cameras worn by an officer and a sergeant involved in the shooting gave investigators a "unique perspective" of the incident. But, citing the ongoing investigation, he said the footage couldn't yet be released publicly.

The chief declined to comment on what exactly the body camera recordings showed.

The sources said the body camera footage supported events depicted in the civilian-captured video of Sunday's shooting, which drew millions of views after it was posted on Facebook. An enhanced version of that video reviewed by the Los Angeles Times showed the man's arm reach toward an officer's waistband.

Law enforcement sources said one of the body camera recordings captured the start of the incident, when officers initially approached the man's tent. One source said the man is seen running inside the tent, at which point the officers tell him to show them his hands and come out of the tent.

One source said an officer is heard on the body camera video shouting, "He's got my gun," multiple times. The footage then shows the officers pulling away from the man as though his actions posed a threat, the sources said.