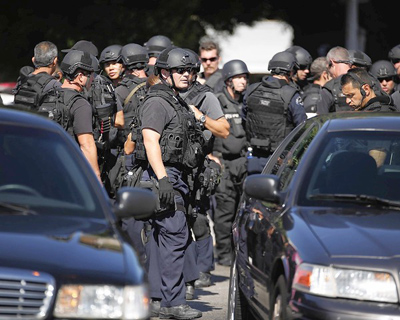 Los Angeles Police Department SWAT team members were among dozens of officers who searched Thursday afternoon for two men, one of whom shot and wounded an officer in South L.A. (Barbara Davidson / Los Angeles Times / August 25, 2011)

What started as a routine pedestrian stop turned into an unprovoked attack and gun battle Thursday that left one police officer seriously injured and dozens of blocks of South Los Angeles locked down for hours as authorities launched a massive dragnet for two men.

The officer, assigned to the Los Angeles Police Department's 77th Division, was being treated at California Hospital Medical Center for non-life-threatening injuries, including bullet wounds to his wrist and elbow. Two other gunshots struck the officer's chest but were absorbed by his bullet-proof vest.

Dozens of officers armed with rifles and clad in ballistic helmets and vests quickly fanned out across the area around 66th Street and Western Avenue. Helicopters circled low as police conducted door-to-door searches. Nearby, ambulances and a firetruck idled, waiting in case they were needed.

Late Thursday, police were questioning several people in connection with the attack and following leads but said they had ended the search with no arrests made.

The shooting took place about 2:45 p.m. as two officers were investigating a rash of car burglaries, LAPD Chief Charlie Beck told reporters at a news conference. As the uniformed officers got out of their patrol car to approach two pedestrians, one pulled out a weapon and began firing.

"Before [the stop] was even in full swing, they were immediately met with a hail of gunfire," Beck said, stressing that the investigation was in its preliminary stages.

The shooter is believed to have used a pistol, police said. According to initial reports, more than a dozen shots were fired at the officers, who returned fire and radioed for help.

The drama was captured in radio transmissions from the patrol car. The wounded officer, laboring to breathe, struggled to give dispatchers his location and a description of the attackers.

Police said the gunman fled north on Western Avenue moments after the shooting. The second man fled south. One of the men forced his way into a home on 71st Street and ran out the back door.

The shooting prompted a massive response by the LAPD, which declared a citywide tactical alert. The search area included 65th Street to the north, 76th Street to the south, St. Andrews Place to the west and Halldale Avenue to the east.

The Times is withholding the name of the wounded officer, who has been with the department for seven years, at the request of police officials, who expressed concern that releasing his identity could put the officer and his family at risk.

He noted that the shootings happened in a year when violent assaults against officers in Los Angeles and across the country have risen dramatically.

"It's a rough business," Beck said. "It highlights the very real dangers police face every day."