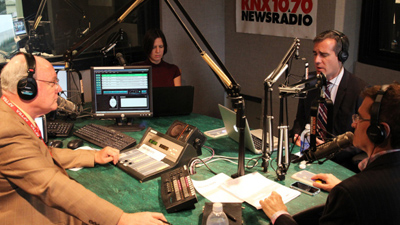 KNX 1070's Charles Feldman reports Garcetti showed no signs of conceding to a cost of living increase for the LAPD as contract negotiations heat up.

Speaking on KNX 1070's "Ask the Mayor" program, Garcetti made the remarks in response to a question from 18-year LAPD veteran James, who said that "rank and file are definitely frustrated, and frankly, a little disrespected."

But the mayor said dispute has nothing to do with respect.

"It's just a mathematical problem. We had a $242 million deficit this year; we were able to close that," said Garcetti. "This coming year, we look forward to getting back to the table, seeing if we can accelerate some of those parity issues."

Garcetti added he plans to attend more roll call meetings to "explain how much we do respect these officers, how much we do want to give you more in your pockets for the service you've given us."

Prior to the "Ask The Mayor" broadcast, Tyler Izen, the head of the Los Angeles Police Protective League, told KNX 1070 that officers only wanted "the low end of fair" when it came to a pay increase.