Since the officers' deaths Oct. 8, each member of the Palms Springs Police Department has become a "world-class hugger," Lt. Mike Kovaleff said in opening the memorial. 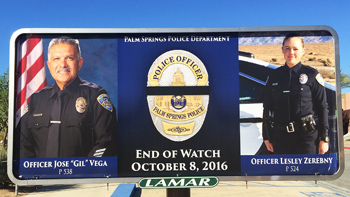 "The hugs, they started off awkward at first, with the gun belts, the radio mics, the body armor, let alone the fact that cops were involved," Kovaleff said. "But they've turned into a work of beauty."

Then Kovaleff referred to an annual 120-mile relay foot race from Baker to Las Vegas that draws officers from across California and elsewhere in the U.S.

"I proudly challenge any department in attendance to the Baker to Vegas hugging cup of 2017," Kovaleff said. "We'll smoke all y'all."

The memorial, which included comments from Palm Springs' mayor, was attended by thousands of police officers.

Vega's youngest daughter got a standing ovation after she gave a very poised speech remembering her father, assuring the audience that he had had a happy, good life and was a "good cop."

Vanessa Vega, 8, said her father had taught her everything, including "baseball, karate and running," even though he proved "very slow" while she got faster. 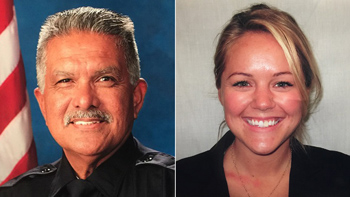 "Even though we can't see him doesn't mean he can't see us," Vanessa said. "He's at peace now."

Vega, a 63-year-old father of eight, had served as a police officer for 35 years and was due to retire in December.

A pastor related to Zerebny's husband, meanwhile, spoke about how the 27-year-old officer loved to sing to her baby daughter Cora.

Zerebny had just returned from maternity leave when she was shot.

"She loved Cora so much. You could see it in her eyes. She was so committed to being a good mother to her," Pastor Joe Anady said.

Officers presented the U.S. flag that covered Zerebny's casket to her husband, a deputy with the Riverside County Sheriff's Office. 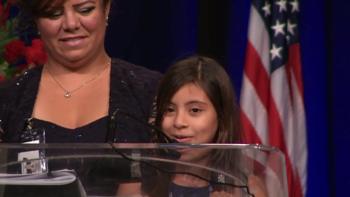 The service was preceded by separate processions for the officers.

Graveside honors for Vega were expected to immediately follow the memorial at the Coachella Valley Public Cemetery, located at 82925 Avenue 52 in Coachella.

Graveside honors for Zerebny were scheduled to take place at a private location, only open to family members.

Vega and Zerebny were shot through a closed front door as they tried to get a man to step out of a home following a disturbance call.

Vega and Zerebny were rushed to a hospital, where they were pronounced dead. 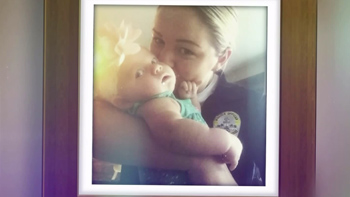 Palm Springs Officer Lesley Zerebny, a new mom, is seen in a photo from a video shown at her memorial service on Oct. 18, 2016. (Credit: pool)

A third officer was also struck by the gunfire, but survived the injuries.

Prosecutors have filed first-degree murder charges against Felix in the shooting, which was described as an "ambush" by Riverside County District Attorney Michael Hestrin.

Felix is eligible for the death penalty.

His name was not mentioned once at the memorial service.