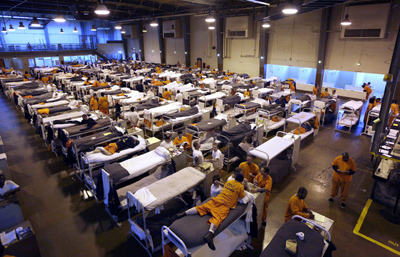 Zackariah Lehnen, a 30-year-old transient, was paroled from a California prison in November after serving five months of a 16-month sentence for drug possession. He left under a program intended to reduce state costs by freeing nonviolent prisoners without supervision.

Six months later he was arrested and charged with murder in the torture and stabbing deaths of an 89-year-old man and a 27- year-old woman in a Los Angeles suburb, according to court documents. He's in jail, with a plea hearing set for July 28.

Lehnen's case, reminiscent of Willie Horton, the Massachusetts inmate who committed rape in 1987 after failing to return from a weekend pass, is an extreme illustration of the risks states face when they look to reduce prison spending by locking up fewer convicts.

"It's a perfect example of what goes wrong when you prioritize saving money over public safety," said Ted Lieu, a former military prosecutor who's now a Democratic state senator from Torrance, in a telephone interview.

U.S. crime has dropped in the past two decades, a period when the number of state prison inmates doubled to 1.4 million and correctional spending more than tripled to $52.3 billion in 2009, according to the Pew Center on the States and the National Association of State Budget Officers, respectively. Now deficits, and a rethinking of how convicts are handled, are prompting states to reduce the number of convicts they hold.

"We're going to release more prisoners around the country," former New York City Police Commissioner William Bratton, who heads the security consulting firm Kroll Inc., said in a telephone interview. "A large share of those being let out are going to be people who are clearly a danger to society."

The U.S. Supreme Court has ordered California to take 33,000 inmates out of prisons in two years to resolve overcrowding and substandard health-care. California runs the nation's largest correctional system, with about 161,000 inmates.

"The system of corrections itself is failing with a 70 percent recidivism rate, and at a cost of $50,000 per inmate, this is not a sustainable system," Brown, who was previously the state attorney general, said in an April press conference. "The realignment plan is a very well-thought-out response to the problem."

By margins of more than 2-to-1, California voters oppose increasing taxes to pay for new prisons and support early release of nonviolent offenders, according to a poll made public yesterday by the University of Southern California and the Los Angeles Times.

As many as 15,500 felons and parole violators who would have gone to prison will instead remain in the custody of Los Angeles County jails, which are already near capacity under a court-mandated population cap, District Attorney Steve Cooley said in a February report.

Among recently convicted felons who wouldn't face prison time in the future, according to Cooley: a methamphetamine addict caught in possession of a flame thrower, a woman who performed abortions without medical training and a credit-card hacker responsible for $6.5 million in losses.

Kathryn Doyle, the mother of Erica Escobar, the 27-year-old that Lehnen is charged with killing, said she is studying California's changing parole process with the goal of preventing violent criminals from being released.

"I understand prisons are overcrowded and the inhuman treatment in them, but I don't understand why my daughter's dead," Doyle said while choking back tears in a telephone interview. "I know she would want me to find out."

The nation's great lock-up began in the late 1960s and early 1970s with crime-busting measures such as "three strikes" laws -- mandatory prison terms after three or more serious offenses -- that put repeat offenders behind bars for extended periods, according to Douglas Berman, a law professor at Ohio State University in Columbus.

New York led states in trimming corrections spending by 9.5 percent to $2.7 billion in fiscal 2011, according to a survey released in October by the Vera Institute of Justice, an independent policy center based in New York City.

Total corrections appropriations for the 44 states that responded to Vera's survey fell $361 million, or 1 percent, to $34 billion. Fifteen states said they were closing facilities, among them New York, Delaware, Georgia and Louisiana.

During 2009, the most recent year for which statistics are available, the number of prisoners under state supervision nationwide fell by 2,900 or 0.2 percent, the first decline since 1972, according to the U.S. Bureau of Justice Statistics.

Rhode Island and Michigan made the biggest prisoner cuts on a percentage basis between 2008 and 2009, according to the Pew Center. From an all-time high of 51,554 in March 2007, Michigan cut its inmate population by 8,100, by sending fewer parolees back to prison for minor violations and by paroling more convicts that had served their minimum sentences, according to John Cordell, a spokesman for the state Corrections Department.

Michigan closed 15 of its 47 prisons or camps, shaved $170 million from its $2.1 billion annual budget and operates with 1,600 fewer employees, Cordell said.

Other states are reducing prison terms for non-violent offenders and investing in alternatives to incarceration. Vermont gave courts authority to sentence certain offenders to home confinement. Washington sends nonviolent offenders who have children to parenting classes where they are ordered to read to their kids for 20 minutes a day.

The fact that crime continues to go down shows that alternatives to prison for low-level offenders are a better use of taxpayer money than $50,000-a-year lock-ups, according Adam Gelb, director of the public safety performance project at Pew.

"States that have reduced their incarceration rates have also seen a drop in their crime rates," he said in a telephone interview.

Lehnen, accused of the double murder in California, is an example of how the state's system for sorting inmates by the risks they pose can fail, Lieu said. A month after his release from prison, Lehnen was in a state court in Beverly Hills, where he pleaded no contest to assault.

Though on parole at the time, and with prior convictions for spousal battery and drug possession, Lehnen was released again, unsupervised, on Dec. 23, court records show. Lehnen was given credit for time served and good behavior, according to court records.

"I don't understand why he got the credits he did," Steve Katz, a deputy district attorney for Los Angeles County, said in a telephone interview.

Lehnen met the criteria for unsupervised release in November because his most serious prior conviction was for drugs, according to Luis Patino, a spokesman for the state Corrections Department.

"This guy was bipolar and supposed to be on psych meds -- who is making sure he takes his meds?" asked Doyle, the murder victim's mother. "He's not the only one. It's a major concern."