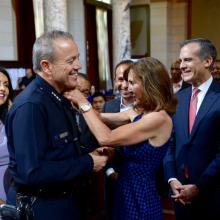 Michel Moore, who has held a variety of high-level positions during his nearly four-decade tenure at the Los Angeles Police Department, was confirmed and sworn in Wednesday as the agency’s 57th chief.

The council voted unanimously to confirm Moore, 57, to lead an organization of roughly 13,000 employees, more than 10,000 of whom are sworn officers, in the nation’s second-largest city.

Moore is succeeding Charlie Beck, who he described “as a mentor, friend and leader who has changed forever the course of the Los Angeles Police Department.”

He will be taking up the baton as the organization faces strained resources and is in need of an upgrade to its technological systems.

The agency’s officers are also grappling with the challenge of responding to the growth and spread of homelessness throughout the city.

The newly minted police chief, who first joined the LAPD in 1981, said he is getting ready to roll out more resources and plans to “transition (away) from legacy technologies that burden our people.”

Moore said that he will work to build trust within the department and to promote policing that is led by “compassion.”

“Each individual that we encounter, whether it be a victim, or an individual experiencing homelessness, or an offender, whatever their station in life,” Moore said, “they deserve the dignity of an individual. They deserve us to treat them professionally and compassionately.”

With his selection earlier this month by Mayor Eric Garcetti, and after Wednesday’s confirmation, Moore will be taking up a job he has long sought.

Moore had applied to be chief nine years ago and made it into the top three but ultimately lost out to Charlie Beck.

Moore, who had been the chief of the Valley Bureau, when he first tried for the job, has been entrusted with critical tasks in the intervening years. He has led bureaus in charge of counter-terrorism issues, the operation of LAPD jails and property, the department budget, communications, the training of personnel and the management of records.

Moore is the department’s expert in crime statistics, having led the LAPD’s weekly COMPSTAT command inspections.

He has also chaired the department’s use-of-force board, which examines police shootings and the use of other types of deadly or injurious force.

His highest post before being selected chief was as first assistant chief and director of the office of operations.

Councilman Mitch Englander, who chairs the Public Safety Committee which held a confirmation hearing earlier Wednesday, said he has known Moore and his family for about 16 years.

He praised Moore as “intelligent” and described his record with the LAPD as “unparalleled.”

“His accomplishments are phenomenal,” he said. “And what he’s done to help steer this, not just the department, but the city and the stakeholders and the direction of transparency and cooperative intelligent and compassionate policing will only help as he becomes the police chief.”

While Moore settled into his new role, the pomp and circumstance over the shift taking place at the top of the LAPD hierarchy revolved around the outgoing chief.

Beck shed his uniform and appeared outside the LAPD’s downtown headquarters in a more leisurely brown button-down shirt and jeans, and walked through a gauntlet of uniformed LAPD officers standing in salute of his more than 40 years of service.

He then got into a brown, 1964 Pontiac GTO — owned by his daughter, LAPD Officer Brandi Pearson — and was driven to his retirement party at the Los Angeles Police Academy in Elysian Park around the corner from Dodgers Stadium.

LAPD helicopters buzzed overheard just before his arrival. About two dozen motorcycle officers lined up at the front entrance to the academy to salute Beck as his motorcade drove by.

Among the first to greet him was current L.A. County Sheriff Jim McDonnell, a former LAPD assistant chief who once was a top candidate for LAPD chief himself.

When he finally arrived at the academy’s field where hundreds of LAPD leaders and rank-and-file officers were already chowing down on barbecue, he was led in by a department color guard playing “America the Beautiful,” on bagpipes.

The entrance followed his final press scrum in the courtyard in front of the dining hall named for one of Beck’s predecessors, Daryl F. Gates.

Many city leaders and civil rights activists have said in recent weeks that they hoped Beck’s tenure was a turning point from the era of a more militant style policing that defined Gates’ time as chief, which in its final year included the 1992 L.A. Riots and the Rampart scandal.

Beck said he believed his successor would continue his work to make LAPD a more caring and community-oriented police force.

He said he hoped to act as a “silent” advisor to Moore in the coming years. He called the new chief a “good friend,” and wished him luck.

Beck said changing LAPD into a police force with a more “heartfelt” culture that “recognizes its place in building a strong city: was his proudest achievement as chief. He wouldn’t say what his biggest regrets were.

“I have a long list of things I wish I would have done different,” he said. “But those are for me to know. And I will give advice to those who take my job and who do a job similar to mine.”

He said no matter how good of a job Moore does, running LAPD will always be among the hardest roles in law enforcement.

“You make your best decision. If you do it with your heart and your head, it will most likely work out,” he said. “But it’s too difficult a job for it to work out 100 percent.”