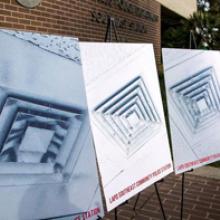 Soon after Donna Wheeler became a detective at the Southeast Community Police Station, which serves Watts and surrounding areas, she started having trouble breathing.

Her respiratory problems were worse at the end of a workday, she said. When she was on vacation, her symptoms improved. Her doctor diagnosed her with asthma caused by irritants in her environment.

Wheeler is one of about 115 LAPD officers and civilian employees who have filed worker compensation claims alleging that their respiratory issues are caused by unsanitary conditions at Southeast Community Police Station, including mold and bird feathers in the ceiling vents, that have existed since 2008.

The city of Los Angeles recently commissioned a report from mold consultants, who inspected vents in the station's detective area. The report, completed in November, did not find a microbial health hazard but recommended that the city should try to reduce the mold.

"We can accept our jobs being dangerous on the streets, but it shouldn't be dangerous at the police station," said Jerretta Sandoz, vice president of the Los Angeles Police Protective League, the union that represents rank-and-file officers, at a news conference outside the station Wednesday.

Sandoz said that LAPD commanders have tried to remedy the situation. Rather, she said, the city of Los Angeles is to blame.

On Dec. 23, attorneys for the union sent a letter to the LAPD's facilities management division asking that the city take immediate action to remove the mold and inspect the entire station.

"It always comes down to money," Sandoz said. "Replacing the air conditioning, cleaning the drains - it's money, is my thought."

Tony Royster, the city's general manager, said in a written statement that the city will begin ridding the station of mold later this month.

"Based on an inspection of the heating and air conditioning system requested by LAPD in a portion of Southeast Area Community Police Station, the City's General Services Division on Dec. 15 ordered cleaning to eradicate mold found in the system's ductwork and registers," said the statement from Royster, who oversees building maintenance. "Work will begin the week of Jan. 30 and is expected to be completed by Feb 10, 2017. In addition, GSD will conduct a full inspection of the station, and eradicate any mold found elsewhere in the building." 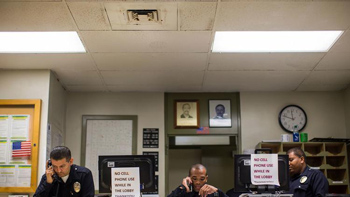 LAPD officers answer phones in the lobby of the Southeast Community Police Station, which has been found to have black mold on the ceiling HVAC vents. (Gina Ferazzi / Los Angeles Times)

LAPD spokesman Josh Rubenstein said in a written statement that the department has "acted quickly" to develop a plan for addressing the mold problem.

"While we understand the mold spore levels do not pose a serious health risk, we are working with the Los Angeles General Services Department to remove it from the building," the statement said. "It is our priority to ensure that LAPD employees and the community feel safe in our stations."

Elizabeth Silver, general counsel for the union, said the cluster of respiratory illnesses among Southeast Community Police Station employees is unusual and has not occurred at other stations.

"The entire station needs to be examined and cleaned up the same way they would clean their own home," Silver said.

In the station's lobby on Wednesday, a police officer's first response when a reporter asked for a tour was to point to the ceiling.

"You can see it right here," he said.

On the roof, two dead pigeons lay next to a ventilation unit that circulates air through the building. The nearby concrete was covered in dirt and bird droppings.

In front of the station, a flagpole teetered at an angle, its base nearly severed by an intoxicated driver who rammed into it on Jan. 2.

Wheeler, the detective, said she remains at Southeast because there are not many equivalent jobs at other stations.

"Pretty much, we just want the city to clean it up," said Wheeler, 56, who investigates auto thefts. "It's disgusting that we have to work in an environment like this every day."