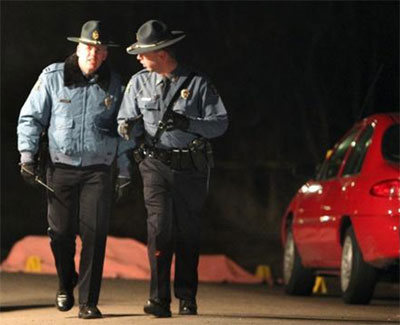 Despite a national campaign focused on police safety, the number of officers killed in the line of duty will increase for the second consecutive year, largely because of an alarming spike in ambush-style attacks, a Justice Department review found.

Federal and local officials have been troubled for the past two years by the overall number of firearms-related fatalities, which are up 23% in 2011, even though violent crime has declined in much of the country, according to preliminary statistics compiled by the National Law Enforcement Officers Memorial Fund.

"It is an incredibly large number," Ederheimer said.

This year, a USA TODAY review of officer deaths highlighted a rising number of ambush slayings. In that August review, nearly 40% of the shooting deaths at that time were attributed to ambush or surprise attacks. That number was up from 31% in all of 2009, according to the most recent FBI study.

Although the pace of overall shooting deaths has slowed since midyear, the numbers continue to frustrate law enforcement officials who convened a national review of officer safety this year.

Less than two weeks until the end of the year, the total number of officer deaths from all causes - 174 - marks the third largest death toll in the past decade.

Alarmed by the recent spikes in officer deaths, Attorney General Eric Holder called a meeting of law enforcement officials in March to examine the problem. Police departments were directed by the Justice Department to require officers to wear body armor or risk losing millions of dollars in federal aid.

(A 2009 study by the Police Executive Research Forum, a law enforcement think tank in Washington, found that 41% of departments did not require officers to wear armor at least some of the time.)

Ederheimer said increased use of body armor, though important, does not necessarily protect victims of ambush. Many of the officers were shot in the head or other unprotected areas of the body.

Ederheimer said Justice Department officials have scheduled a meeting of safety and training experts Jan. 26 to discuss the overall firearm deaths, in addition to the increase in ambush attacks, to produce written guidelines for police agencies. "This is a priority of the attorney general," Ederheimer said.

Among the most recent victims of a deadly ambush, Atchison, Kan., police Sgt. David Enzbrenner, 46, was shot in the back of the head Dec. 9 as he was responding to a nuisance complaint.

Police Chief Mike Wilson said the gunman, who was not apparently involved in the incident, attacked the officer from the rear and later fatally shot himself. "It was an assassination," Wilson said.

Wilson said Enzbrenner, a 24-year veteran, was one of the "best-trained, best-educated and most-informed" of the department's 23 full-time officers. "He did all the right things to avoid something like this."

Before the shooting, Wilson said, he and his officers were aware of the rising number of officer fatalities and took appropriate precautions.

He said Enzbrenner wore body armor at the time of the attack, but the gunman targeted his head.

"When someone assassinates you from behind, all of the training, education and equipment is sometimes not much help,'' Wilson said.