Skip to main content
01
Sep 2008
Mornings with Maggie: LAPD behind him now, golf in La Quinta his next big case

Jim Thornton was just 22 years old when he learned how good it feels to go home alive.

The 1974 shooting was the first major incident for the rookie Los Angeles police officer, fresh out of the academy. A man opened fire directly on Thornton and his partner. At first it sounded just like firecrackers.

It was as if time stopped. Then his training kicked in. Thornton grabbed a shotgun from under the seat of his cruiser. That was the day he shot and killed a man.

"I wasn't sad that he was dead, and I wasn't sad I had to shoot him," he said. "But from that point on, I knew I couldn't take anything for granted anymore. During his 38 years with the Los Angeles Police Department, Thornton has seen a little bit of everything from behind the blue curtain.

His first big event was the police shootout with the Symbionese Liberation Army in 1974. Thornton was a naive kid in the riot gear of the time, a half-helmet with a pair of plastic goggles.

In the thick of that moment, Thornton decided to become a motor officer. Things were getting pretty hairy and the officers called for backup. Twelve motor cops in a V-formation came around the corner and separated the crowd.

Thornton looked at his partner and said, "That's what I want to do." And he did. Thornton eventually became the No. 1 motor cop in the department - the officer with the most seniority.

He worked security during the 1984 Olympics. During the Los Angeles riots that followed the Rodney King verdict, Thornton worked 31 days straight on 12-hour shifts.

He's been a police escort, and made enough celebrity traffic stops to fill an entire photo album - including everybody from Drew Carey to Andy Garcia.

Thornton's last roll call came in July. The room was crowded with his fellow officers, family and the friends he's collected over time.Typically, officers are taken away from their last roll call in a limousine. Thornton, however, got the special treatment.

A police helicopter did a fly-by overhead. Three L.A. TV stations showed up with camera crews. Finally, Thornton's wife, Lyn, arranged for a Coors Lite truck to pick up Jim and take him around the city.

"I've never seen anything like it," he said. "It was the best roll call ever." The Thorntons have relocated from Los Angeles to La Quinta, where they will settle into the fun and quiet of retirement.

Even here, tucked away next to a mountain, Thornton is surrounded by reminders of his life with the department. His motorcycle boots have been bronzed and sit on a shelf in his office. The walls are hung with awards, badges and certificates.

His personalized license plate reads: MR BCMC (Mr. Big City Motor Cop).Even his Harley, Lucille, was a police bike in another life.His plans now? "We're going to take golf lessons and see if we like that," he said.

Maggie Downs is a features reporter for The Desert Sun. She can be reached at 778-6435 or [email protected]. 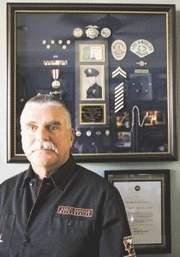 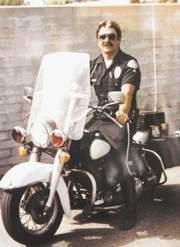