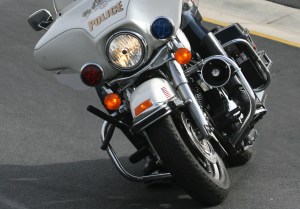 A Long Beach police officer was recovering Monday after he collided with a car allegedly driven by an unlicensed driver.

The officer was heading westbound towards the intersection of Anaheim Street and Walnut Avenue at around 6:10 p.m. on Sunday when an eastbound Ford Focus turned in front of him and the officer wasn't able to stop in time, according to Long Beach Police spokeswoman Lisa Massacani.

"[He] was unable to stop in time and his motorcycle collided with the passenger vehicle," Massacani said.

Two other motorcycle officers with him managed to avoid the collision.

The officer was taken to a local hospital and treated for non-life threatening-injuries.

The driver of the Focus, a 47-year-old Long Beach man whose name was not made public, was not injured.

He was cited at the scene for driving without a license and making an unsafe turn. His car was also impounded.