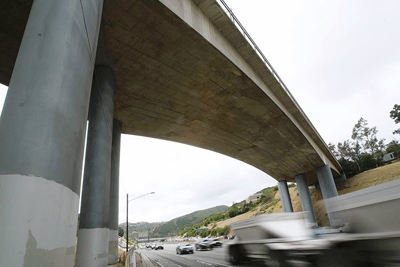 The Mulholland Drive Bridge over the 405 Freeway is scheduled to be partially demolished next month. Authorities have warned drivers that a 53-hour planned closure of the freeway at the Sepulveda Pass will cause significant delays. (Gary Friedman / Los Angeles Times / June 6, 2011)

Los Angeles city and county leaders did their best Monday to eliminate any ambiguity in their quest to warn motorists about the impending traffic "nightmare" over a weekend in mid-July, when construction crews plan to shut down several miles of the 405 Freeway for more than two days.

"There's gridlock on the 405 virtually any time of the day, but particularly during the rush hour, and if you think it's bad now, let me just make something absolutely clear: On July 16 and 17, it will be an absolute nightmare," said Mayor Antonio Villaraigosa, who was one of nearly a dozen speakers at a news conference outside Skirball Cultural Center in Brentwood.

"And that's why we're asking the public to plan ahead," Villaraigosa said. "To avoid the area, to not go on the 405 or anywhere close during that period of time."

He suggested: "Go on vacation."

The 405 will be closed for 53 hours beginning the evening of July 15 and ending early the morning of July 18 - mostly for demolition work on the Mulholland Drive Bridge.

The northbound 405 will be closed for 10 miles between the 10 and 101 freeways, and the southbound 405 will be closed for four miles between the 101 Freeway and the Getty Center Drive exit. The work is part of a larger $1-billion freeway improvement project that includes constructing a 10-mile northbound carpool lane to complete what officials say is a network between Orange County and the San Fernando Valley.

The closure in July will allow crews to demolish the south side of Mulholland Bridge and then spend about 11 months doing bridge reconstruction on the south side. After that, crews will demolish the north side of the bridge, which will require another extended freeway closure.

Officials say that closing those segments of the freeway is unavoidable. But they predict that the repairs and the new carpool lane will slash commute time and have other benefits.

"Stay the heck out of here," L.A. County Supervisor Zev Yaroslavsky said. He said he knows every shortcut in the area and that "not one of them is going to work."

"We need to suck it up" and prepare for a tough weekend, he said.

Caltrans District 7 Director Michael Miles predicted a "horrendous backup" and a "really horrendous weekend" and suggested that motorists and residents stay put and explore their own neighborhoods during that time. He added that a "barbecue would be good that weekend."

Officials have advised that Sepulveda Boulevard is "intended as an alternate route for local resident access only" and that the road "does not have the capacity to accommodate both local and diverted freeway traffic."

Construction is planned along Sepulveda as well; it is set to begin June 13 and last about 11 months. The road will be reduced to one lane in each direction during some hours between Mountaingate Drive and an area just north of Skirball Center Drive, while crews work to move existing overhead utility lines underground.

Manny Ghaffari, owner of Manny's Pizzeria on Sepulveda Boulevard in Brentwood, said his customers - in between bites of pizza and pasta - have been talking about the freeway closure and want to "make sure we are open so they don't stay hungry."

But Jay Handal, chairman of the West L.A. Neighborhood Council and owner of San Gennaro Cafe in Brentwood, was not so optimistic.

He said that city and county leaders' warnings for residents to stay away from the area do not "exactly make it very profitable for the businesses." Handal said he and other owners have pondered filing a lawsuit that would seek an injunction to stop the closure.

Handal said he was nonetheless prepared for business that weekend, but will probably have to reduce staffing and offer some sort of a deal to entice more customers in.

"I pay way too much rent not to open," he said.