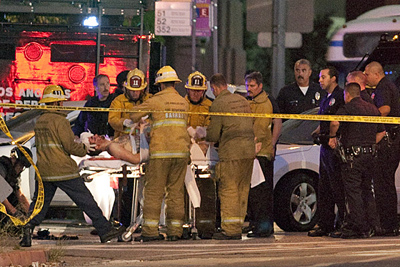 A suspect who led officers on a chase Tuesday and may have been involved in a slaying was taken to the hospital after being shot by officers. (Allen J. Schaben / Los Angeles Times)

Authorities released additional details Tuesday night following a car chase that ended when a suspect rammed into another vehicle near downtown Los Angeles, escaped from his car with a gun and had a shootout with police.

The man, whose name has not been released, allegedly stole a white, two-door Honda at gunpoint in Studio City, according to the Los Angeles Police Department. The vehicle was spotted about 6 p.m. near the intersection of Sunset Boulevard and Rosemont Avenue, the LAPD said.

Officers tried to pull the vehicle over, but the driver refused and the chase began.

The suspect led officers through areas in and around Echo Park, Silver Lake and downtown for more than an hour before heading into the Westlake District. The pursuit ended after the driver crashed into another vehicle at the intersection of South Bixel and West 7th streets.

"The suspect immediately exited the vehicle with a long gun and engaged the officers with gunfire. The officers returned fire, striking the suspect, who then fell to the ground," said LAPD Sgt. Rudy Lopez.

Authorities said no officers or pedestrians were hit by the gunfire. The suspect was taken to a nearby hospital in unknown condition, but authorities say he is expected to survive.

The driver of the vehicle that the suspect struck in the intersection was also taken to a hospital and is reportedly in good condition.

Lopez said the suspect may have been involved in a homicide that occurred earlier in the year.