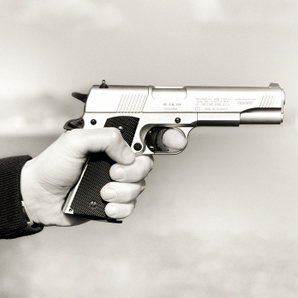 A new California law that prohibits the carrying of an unloaded handgun in public already is under legal attack.

Charles Nichols, a Redondo Beach resident, filed a lawsuit late last year in federal court against the state seeking to overturn restrictions on where he can display a handgun.

AB 144, which took effect this week, expands California's firearm regulations to prohibit people from openly carrying an unloaded handgun outside of a person's home or vehicle. It already was illegal to publicly carry a loaded handgun.

Nichols' complaint contends that such state laws violate the Second Amendment, protecting the right to keep and bear arms for personal safety.

California law allows handgun owners to openly carry their weapons only when they are in imminent danger.

Handgun restrictions have been at higher risk of reversal since 2008, when the U.S. Supreme Court struck down strict regulations on the weapons in Washington, D.C.

California's restrictions should face a similar fate as those of the nation's capital, Nichols argues in the lawsuit. "By banning fully functional, loaded handguns from being openly carried for the purpose of self-defense, (California's statute) is a more restrictive ban than the law struck down in (Washington) as unconstitutional," he wrote.

The legislator described the measure as closing a loophole in state law, which previously regulated handguns only when they contained bullets. A person could openly display a handgun if the ammunition was in a jacket pocket.

This scenario alarmed police across the state, who received calls to check unconcealed weapons in public, Portantino said. The California Police Chiefs Association supported the legislation.

"The problem was caused by the proliferation of unnecessary display of weapons," Portantino said.

Advocates for openly carrying firearms contend that state and local governments are reaching beyond their discretion with AB 144 and similar laws.

Eugene Volokh, a UCLA law professor and expert in firearm regulations, said the gun-rights crowd has a point. According to the Supreme Court's ruling in District of Columbia v. Heller, "the right to keep and bear arms includes a right not just to possess guns, but also to bear them in the sense of carry them," Volokh said.

However, the federal courts have upheld regulation of concealed weapons, which require a special permit in much of the country.

California's concealed weapons permitting process varies by location and is operated by county sheriffs or city police departments. In his complaint, Nichols cites his difficultly in obtaining a concealed weapon permit as further justification for openly carrying a handgun.

"By today's standards, carrying openly is seen as an in-your-face sort of act in a way that carrying concealed is not," he said.