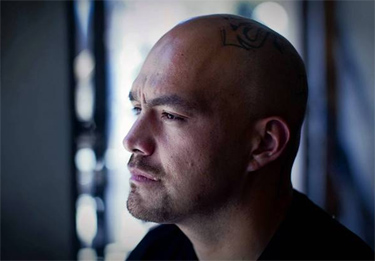 Under the new law, Christopher Fehoko, 32, was recently and unexpectedly discharged from parole while in the middle of a rehabilitation program. (Gina Ferazzi / Los Angeles Times / June 5, 2012)

The number of state prison parolees freed from law enforcement supervision jumped more than sixfold in April as a little-known law that speeds up the release process took effect.

About 8,500 parolees were taken off supervision, a number that surprised many law enforcement officials who said they were racing to figure out how to deal with it. By contrast, about 1,300 parolees were discharged in March.

The shift has two major effects. It means those parolees will receive fewer rehabilitation services designed to ease their transition out of prison. And it also effectively reduces the powers police have to monitor their conduct.

When a criminal is on parole, police have broad authority to conduct random searches and arrest him on such violations as possessing weapons or associating with other felons.

"Taking away parolee status, from a law enforcement perspective, removes a valuable tool that officers use to ensure compliance with the law," Long Beach Police Chief Jim McDonnell said. "We will no longer have the ability to violate their parole based on criminal behavior but rather we will have to arrest and prosecute them on a new charge, which is resource-intensive and time-consuming."

The parole change was included in several laws that Gov. Jerry Brown signed last year to trim the budget shortfall by shifting from state to county authorities all responsibility for overseeing many prisoners and recently released inmates.

Under the new law, parolees who were last imprisoned for a nonviolent and nonsexual offense could be discharged in as little as six months.

Previously, they had to wait at least a year to end supervision.

Some law enforcement officials fear that a reduction in rehabilitation - which includes counseling, drug intervention and housing assistance - will make it harder for ex-criminals to get back into society and will make recidivism more likely.

"There is no reason to expect that they will be monitored or rehabilitated as they have been in the past," Los Angeles Police Chief Charlie Beck said.

Los Angeles County Dist. Atty. Steve Cooley agreed, saying that the change appeared to be designed only to save the state money.

"It's not about public safety at all," he said.

In April, nearly 5,800 of the discharged parolees returned to the Los Angeles, Orange, Riverside and San Diego county areas, where they were initially arrested, according to state figures.

California officials say the number of released parolees should level out within six months, but they acknowledge that the state is on pace to far exceed the nearly 21,000 discharged last year.

The increase in parolees' releases is one aspect of sweeping changes in the way California deals with criminals in the wake of sharp budget cuts and aU.S. Supreme Courtdecision requiring the state to reduce prison overcrowding.

Thousands of criminals who would normally serve their time in state prisons are now being kept in county jails, raising concerns about overcrowding and the possibility of forced early release of nonviolent offenders.

The change caught many by surprise, not just authorities but parolees as well. Former prisoners interviewed by The Times say they recently went to their usual appointments with parole officers only to learn that they had been released - and that the state would no longer pay for their care.

"I was scared," said Danny Romero, who is enrolled in a residential rehabilitation center near USC and has been to jail six times, the last for commercial burglary. "I didn't have any money ... and I thought maybe I should go rob a store like I've done before."

Romero's rehab facility agreed to pay for his continued treatment, but many other ex-convicts have either decided to simply stop or could not afford to keep it up, advocates say.

Nearly 75 people have already left rehabilitation centers that contract with the San Francisco-based Haight-Ashbury Free Clinics, according to Demetrius Andreas, the organization's vice president of community and after-care services.

Andreas worried that many will backslide into their old habits.

"Abruptly stopping in midstream is an open invitation to return to criminal activity," Andreas said.

Some people released from parole are able to continue to find services, although they generally cannot pay for them. Mark Faucette, vice president of the Amity Foundation, which runs a residential rehabilitation center near USC, said he has 20 clients - including Romero - who are being treated for free.

"If we just kick them to the streets, we're going to be paying for them one way or another," said Faucette, who added that he wasn't sure how long the foundation could continue taking people who cannot pay.

But many other released parolees are not returning to their rehab programs.

One man with a long history of drug abuse and mental health problems was making good progress at a Haight-Ashbury center, according to Michael J. Brenner, the group's regional director. But "as soon as the agent told him he was off parole, he disappeared downtown," Brenner said.

A week later, the man's mother called Brenner, worried that her son had started his old habits.

"If you see him, could you tell him to please call his mother?" Brenner recalled the woman asking.