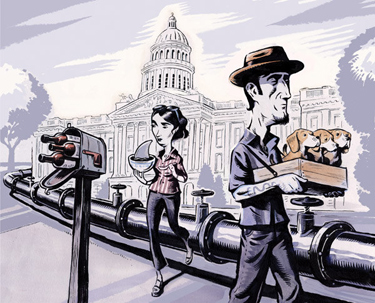 (Lars Leetaru / For The Times)

Californians will no longer be able to carry handguns openly in public, buy alcohol at self-serve checkout stands or purchase shark fins for their soup under hundreds of new laws that take effect Jan. 1.

Other measures bar minors from tanning beds, allow students to be suspended for cyber-bullying and require booster seats for children in cars until they are 8 years old or at least 4 feet, 9 inches tall.

Despite another year of budget shortfalls, the 760 bills that Gov. Jerry Brown signed into law in 2011 included several that cost money. Among them: new funding for a bullet train and a campaign to boost enrollment for food stamps as the economy remains sluggish.

Some bills took effect immediately after the governor signed them. One allows an NFL stadium proposed for downtown Los Angeles to receive expedited legal review of any challenges over environmental issues. Another prohibits cities and counties from outlawing male circumcision.

Brown faced a backlash for signing some of the proposals, including one allowing illegal immigrants to receive private financial aid administered by California's public colleges. (Another permitting access to taxpayer-provided aid takes effect in 2013.)

Known as the California Dream Act, the pair of measures drew fire from the public and some lawmakers who consider them unfair to students born in the United States. But Assemblyman Gil Cedillo (D-Los Angeles) said his legislation recognizes the value of young people who graduate from high school in California regardless of where they were born.

"It's important for California and the future of our economy to take advantage of the investment we have made in these young men and women,'' Cedillo said.

Brown was also criticized for signing a law requiring public schools to include the contributions of gay, lesbian, bisexual and transgender people in history lessons and instructional material, although new textbooks for lower grades are not planned for three years.

One of the most contentious issues was the ban on the open carrying of handguns, which put California in the minority of states that have adopted such restrictions. Some gun-rights advocates say the new law will not keep them from appearing in public with weapons that are not covered by the ban.

"Law-abiding citizens will start openly carrying unloaded long guns in public because their basic and fundamental civil right to self-defense, as enumerated in the 2nd Amendment, is clearly being infringed upon,'' said Yih-Chau Chang, a spokesman for the firearms advocacy group Responsible Citizens of California.

Assemblyman Anthony Portantino (D-La Cañada Flintridge) said he introduced the measure in response to law enforcement officials who felt that public safety was jeopardized by gun owners wearing firearms on their hips at coffee shops and other public venues as they called attention to a right to bear arms.

Athlete safety: requires school districts to develop a process for identifying cases in which students suffer concussions in sports mishaps and require a parent to give written permission for the athlete to return to the lineup.

Audits: gives the state auditor broad new powers to investigate misuse of taxpayer funds by cities and counties, in response to the financial scandal in the city of Bell.

Autism: requires health insurers to include coverage for autism.

Bail: requires that people extradited to California to face criminal charges face $100,000 in bail in addition to any bail already issued for the underlying offense.

Ballot measures: requires all ballot initiatives and referenda to be decided in November general elections, which typically have higher turnout - and more liberal voters casting ballots - than do June primaries. Excludes measures placed on the ballot by the Legislature.

Beer: bars the importation, production and sale of beer to which caffeine has been directly added as a separate ingredient, in response to incidents in which young people have been hospitalized with severe intoxication after drinking the beverages.

Bullet train: provides $4 million for planning work on a section of a high-speed rail system proposed between Los Angeles and San Diego.

Child actors: streamlines the process for obtaining state permission for minors to work in the entertainment industry by allowing parents to get temporary permits online rather than through the mail.

Clemency: requires governors to give prosecutors a chance to weigh in at least 10 days before acting on requests for commutation of prison terms. The law was proposed after former Gov. Arnold Schwarzenegger acted on his last day in office to reduce a prison sentence for the son of former Assembly Speaker Fabian Nuñez.

Cyber-bullying: allows schools to suspend students for bullying classmates on social networking sites such as Facebook.

Drugs: outlaws the supplying of a drug or compound containing dextromethorphan to a person younger than 18 without a prescription.

Drunk drivers: authorizes courts to revoke, for up to a decade, the driver's license of any person convicted of three or more DUIs in a 10-year period. Another law bars police agencies that set up drunk-driving checkpoints from impounding cars from sober but unlicensed drivers if there is a legal driver available to take the wheel.

Elder abuse: allows wage garnishments against anyone convicted of elder abuse or financial abuse of a dependent adult.

Farmworkers: requires that, if the Agricultural Labor Relations Board refuses to certify an election because of employer misconduct, the affected labor organization shall be certified as the exclusive bargaining representative.

Food stamps: eliminates the requirement that food stamp recipients be fingerprinted to prevent fraud. Another law calls for state agencies to promote more enrollment in the federal food stamp program.

Foster care: allows foster care for eligible youths to extend beyond age 18, up to age 21, when the Legislature provides the money. Another measure requires California State University campuses and community colleges to give foster youths priority to enroll in classes.

Gas pipelines: mandates automatic shut-off valves and improved maintenance in vulnerable sections of pipelines, in response to the deadly explosion in San Bruno in 2010.

Human trafficking: requires large retailers and manufacturers to publicly report what steps they take to make sure those providing their supplies and products are not engaging in slavery and human trafficking.

Infused drinks: allows bars to infuse alcohol with fruits and vegetables for use in cocktails.

Insurance: prohibits doctors, when treating workers' compensation patients, from prescribing drugs in which they have a financial interest.

Iran: mandates that the state's pension boards divest their funds from companies that are part of the defense or nuclear industries in Iran.

Job applicants: bars employers from using credit reports in deciding whether to hire someone.

Lap-Bands: requires periodic inspections of outpatient surgery centers that perform Lap-Band operations and other procedures. The law is a response to the 2007 death of singer Kanye West's mother after liposuction and breast augmentation surgery at a Westside clinic.

Libraries: restricts the privatization of public libraries by requiring that they continue to pay government-scale wages.

Lying politicians: forces elected officials to forfeit office if convicted of falsely claiming they have been awarded military decorations.

Marijuana: gives cities and counties clearer authority to regulate the location and operation of medical marijuana dispensaries. Another law creates new penalties for the possession of synthetic cannabis products, which have been sold in convenience stores and tobacco shops.

Maternity leave: requires employers to maintain and pay for health coverage while women are on maternity leave.

Medical consent: gives children 12 and older the authority to get medical care for the prevention of sexually transmitted disease, including the HPV vaccine, without parental consent.

Missing persons: requires law enforcement agencies to submit a missing persons report to the state attorney general when the person being sought is 21 or younger, a change from the current cutoff age of 16.

Needles: empowers cities and counties to allow pharmacists to furnish a customer with up to 30 hypodermic needles and syringes without a prescription. Another law permits the state Department of Public Health to allow select groups to provide hypodermic needles and syringe exchange services in any area where it determines that conditions exist for the rapid spread of HIV.

Prison phones: makes it a crime for cellphones to be smuggled into state prisons and allows increased time behind bars for inmates caught with them.

Prostitution: imposes a special court fine of $25,000 on defendants convicted of prostitution involving a minor.

Protests: makes it a misdemeanor to create a disturbance on or next to an elementary or middle school campus where the action threatens the physical safety of students.

Puppies: outlaws the selling of live animals on any street, sidewalk, parking lot or other public right-of-way.

Raves: requires any state agency that plans an event with more than 10,000 people on state property to conduct a threat assessment before the event.

Recycling: establishes as state policy that 75% of solid waste should be diverted from landfills to recycling and other processes by 2020.

Restaurants: may use up their supplies of shark fins - a delicacy in Chinese cooking - purchased before Jan. 1. After that, sale and possession of shark fins will be illegal.

Saving parks: allows nonprofits to take over the operation of state parks that otherwise would be closed because of budget problems.

Senior care: mandates that residential care facilities for the elderly notify residents within 10 days if the state determines that a serious health and safety violation occurred at the facility.

Sexual orientation: encourages state university systems to collect data on students' sexual orientation and encourages the legislative analyst to use it to recommend improvements in the quality of life for gay, lesbian, bisexual and transgender students.

Student government: authorizes illegal immigrants who are students to receive grants, fee waivers and reimbursement for serving in student government at public colleges.

Work rules: establishes an employee's right to as many as three days of bereavement leave within three months following the death of a spouse, child, parent, grandchild, sibling or domestic partner.

Wine: provides a special permit that makes it easier for California firms to sell wine over the Internet, by phone or by direct mail.