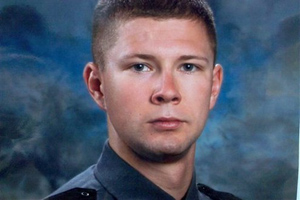 A 24-year-old sheriff's deputy, whose wife is pregnant with their second child, was fatally shot during a gun battle at the end of a six-hour standoff at a house in central New York, authorities said Tuesday.

Deputy Kurt Wyman died after being rushed to a Utica hospital following the shootout around 2 a.m. Tuesday inside a garage in the rural hamlet of Knoxboro, Oneida County Sheriff Robert Maciol said eight hours after the incident.

He said the four-year veteran was shot once with a shotgun by 40-year-old Christian Patterson as officers tried to take him into custody around 2 a.m.

The sheriff said three other officers returned fire and hit Patterson several times. He was in critical condition at the same hospital and will be charged with aggravated murder because the killing involved a police officer, authorities said.

Maciol said Wyman and Deputy Mark Chrysler arrived at Patterson's home around 8 p.m. Monday after his live-in girlfriend called 911 and reported he was threatening to kill her and himself. The sheriff said Shannon Secor fled to a neighbor's home and was unharmed.

Patterson held the deputies at bay while other law enforcement officers arrived and tried to get him to surrender. Maciol says the officers rushed Patterson six hours later when he indicated he was going to harm himself. The sheriff refused to release any other details about the circumstances of the shootings.

Maciol said Wyman joined the sheriff's department in October 2007 and spent a year deployed in Iraq with a Marine Corps Reserve unit before returning to the police agency in 2009.

Survivors include his parents, a sister, his 18-month old son and his wife, Lauren, who is pregnant with the couple's second child. A sheriff's department official said she went into labor early Tuesday morning after learning her husband had been shot.

"Just an exceptional public servant who served his country and his county with pride and he will be greatly missed," Maciol said of Wyman, the first member of the county sheriff's office killed in the line of duty.

Knoxboro is a tiny rural crossroads in the town of Augusta, a farming community of 2,000 residents about 30 miles southeast of Syracuse.