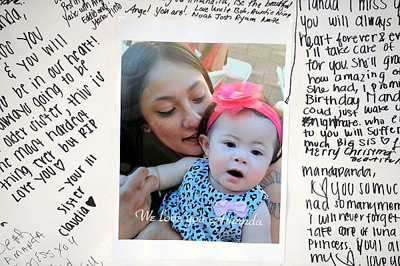 A photograph of Amanda Ghossein, one of the four victims of the Northridge shooting on Dec. 2, 2012, with her daughter, Luna. The picture is part of a memorial to the shooting victims at the home in the 17400 block of Devonshire Street in Northridge. (Hans Gutknecht/Staff Photographer)

The lead suspect in the fatal shootings of four people in Northridge promised a judge in September that he would stay away from guns when he was placed on probation for a methamphetamine charge, according to court records.

Then, suspect Ka Pasasouk, 31, of Los Angeles almost had his probation revoked just three weeks ago when he missed a court hearing. But when he showed up at the courthouse later that day, the judge allowed him to remain free.

Pasasouk also failed to check in with his probation officer twice this year, and the county was in the process of obtaining another warrant for his arrest before the Northridge shootings took place, county officials said Thursday.

Pasasouk now stands accused of the murder of four people at what has been described as an illegal boarding home in Northridge on Sunday. Three others have been accused of aiding the crime.

Their bodies were found at 4:30 a.m. Sunday beside a house at 17441 Devonshire St. Neighbors called police after hearing shouts, screams and gunshots.

Investigators developed leads that led them to Pasasouk and three other suspects, who were tracked to the Silverton hotel and casino in Las Vegas and arrested Monday without incident.

In addition to Pasasouk, Howard Alcantara, 30, of Glendale, was arrested on suspicion of robbery and aiding a felon after the fact. Two Los Angeles women, Donna Rabulan, 30, and Christina Neal, 33, were held for aiding a felon.

Pasasouk already had four criminal convictions when he pleaded no contest to methamphetamine possession in September, court records show.

In 2004, he was twice convicted of unauthorized taking of a vehicle. He was then convicted of robbery in 2006 and of petty theft in 2010, a charge that was elevated to a felony because of his record. 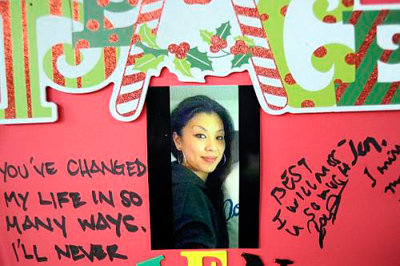 A photograph of Jennifer Kim, 26, one of the four victims of the Northridge shooting on Dec. 2, 2012, at a memorial outside the home in the 17400 block of Devonshire Street in Northridge. (Hans Gutknecht/Staff Photographer)

On Sept. 6, Los Angeles police stopped and searched a car on Lasaine Avenue in Northridge, according to court records. Pasasouk, who was in the car, had methamphetamine in his pants pocket, a prosecutor said.

At a court hearing two weeks later, a prosecutor agreed to a no-contest plea on the meth charge, and a judge found him eligible for drug treatment and released him. He'd spent 14 days in jail.

"No dangerous or deadly weapons or firearms," Judge Jessica Silvers told Pasasouk in court, according to a transcript.

She added, "And no firearms ever."

Asked if he understood that and the other terms of probation, Pasasouk said, "Yes, ma'am."

After he missed a court hearing Nov. 14, Silvers issued an arrest warrant and ordered his probation revoked. But when he showed up belatedly to court that day, she let him remain free on probation. That was 18 days before the slayings.

Pasasouk's case was delayed to Jan. 16 for a "progress report" on his drug treatment.

Probation Department spokeswoman Carol Lin said Pasasouk failed to check in with probation twice this year. He had been released from state prison in January 2012 and did initially report to a probation officer, Lin said. His probation was supervised by the county under California's new realignment program. Previously, he would've been subject to stricter monitoring by state parole agents.

But after that initial contact he "absconded" or failed to check in with probation for at least seven months. The county did not hear of him until he was arrested again.

After he was released following that September arrest, he absconded from probation once again. The county was in the process of obtaining an arrest warrant for him when the Northridge shootings occurred, Lin said.

"This individual was not somebody that I would classify as amenable to any type of supervision, whether it was under AB 109 (under county probation) or prior to AB 109 (under state parole)," Chief Probation Officer Jerry Powers said.

When asked whether parole officers would have supervised the suspected shooter more closely than probation officers did, Powers said, "It's hard to monitor anybody when they've absconded."

"If they don't want to report to the court, to Probation, to Parole, there are ways for them to do that," he said. "I don't think whoever they're reporting to makes a heck of a lot of difference when somebody wants to abscond."

The four suspects are being held at the Clark County Detention Center under fugitive warrants. They had court hearings for extradition scheduled for Thursday morning in Nevada.

Los Angeles police released few additional details on the crime Wednesday, and have yet to detail the suspected motive. 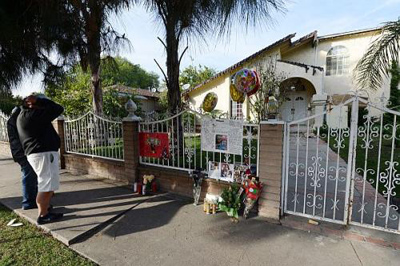 People look at a memorial to the four victims of the Northridge shooting on Dec. 2, 2012, at the home in the 17400 block of Devonshire Street in Northridge.(Hans Gutknecht/Staff Photographer)

Investigators said the victims were visiting friends at the home when they were confronted and fatally shot by the suspects, but what connection they had to the suspects or a specific motive for the shooting remained unclear.

Rolina Calabia, who is Robert's sister, said her brother was likely dropping Ghossein and Kim off, but she said she did not know why they stopped at the Devonshire Street house. She also said she didn't recognize the names of any of the suspects.

"He's very trustworthy," Calabia said of her younger brother, who was a licensed vocational nurse who worked at a local hospice.

"He wasn't judgmental," Calabia said. "He always saw the good in people. He was probably just dropping them off for the night."

Calabia said she is still stunned that she will no longer see Robert, who is the youngest sibling in the family and was often referred to as "totoy," a Tagalog nickname which means "young one."

The family migrated more than 20 years ago from the Philippines, Calabia said.

"My mother said: 'I did not work so hard to bring my son to America, only to see him get killed,"' Calabia said.

A public viewing is planned at Groman Mortuary this Sunday, she said.

Police said Ghossein, Kim, and Navales' bodies were close together in the shooting. Calabia said she believes it was her brother's body who was farthest, possibly because he was trying to get away from the shooter.

Ghossein, who would have turned 25 on Tuesday, was the mother of a 1-year-old daughter named Luna.

At a growing, makeshift memorial along the white iron fence that surrounds the Devonshire Street home, more friends and family left cards, notes, flowers and candles to Ghossein, whose nickname appeared to be "MandaPanda."

A photograph of Ghossein and her daughter was placed on a poster board. Those who left notes to Ghossein promised to take care of the little girl.

"Whoever did this to you will suffer," read one note to Ghossein.

Kim, 26, was also remembered by friends.

Kim's family sent a statement to KNBC (Channel 4) saying they were in "complete shock," and that they "don't have a clue as to why this would happen to her."

"She was always there to help out her family when needed. Always thought of others before herself, and had lots of love to share," wrote family members in a statement to NBC4.

"There will be no joy during the holiday season and her death will leave an eternal void in our hearts. No words can express the pain we feel with her being gone. We hope justice will be served so that Jennifer may rest in peace."