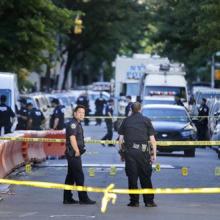 Numbers mark a crime scene near the site where a police officer was fatally shot in the Bronx section of New York, Wednesday, July 5, 2017. Police said other officers shot and killed the suspect after he drew a revolver on them. (AP Photo/Seth Wenig)
COLLEEN LONG
Associated Press

A police officer was shot to death early Wednesday, ambushed inside a command post RV by an ex-convict who had ranted online about his treatment in prison and about police getting away with killing people, authorities said. The gunman was killed by officers about a block away.

Miosotis Familia, a 12-year member of the New York Police Department, was writing in her notebook in the front seat when the gunman strode up to the vehicle in a Bronx neighborhood around 12:30 a.m. and fired one round through the passenger-side window, striking her in the head, authorities said.

Her partner radioed frantically for help, and police caught up to 34-year-old Alexander Bonds, who was gunned down after pulling a revolver, police said. A bystander was hit in the abdomen by a bullet and was in stable condition.

Witness Jay Marzelli told the Daily News said he was getting a sandwich at a bodega and thought the shots were Fourth of July fireworks at first.

"All of a sudden there was all this running and stuff going on, and I look out, probably 40, 50, 60 cops screaming, 'Call a paramedic, clear the block!'" he said. "It looked like there was a riot going on, and two seconds later I hear gunshots, 'Bam, bam.'"

Familia, 48, had been stationed in the mobile command post, which is used during major events and in high-crime areas. She had been writing in her memo book, in which officers record their shift activity, when Bonds walked up.

Bonds, who also went by the name John Bonds, was sentenced to six years in Attica prison on an armed robbery case in Syracuse and had been paroled in 2013. He had other prior arrests, including one in 2001, when as a 15-year-old he was accused of attacking an officer with brass knuckles.

In a video posted on Facebook in September, the Bronx man ranted about the treatment of civilians by officers and talked about how hard life was behind bars.

"Don't think every brother, cousin, uncle you got that get killed in jail is because of a Blood or Crip or Latin King killing them. Nah, police be killing them and saying that an inmate killed them," he said in the video.

At another point, he said into the camera: "I'm not playing, Mr. Officer. I don't care about 100 police watching this." And: "It's time for people to rise up."

Aside from the police rant, Bonds' Facebook page mostly consisted of inspirational quotes and quizzes.

Police said they were trying to identify the motive for the shooting.

While tensions have been running high between police and black people around the country, there was no immediate indication the killing had a racial dimension. Bonds was black; Familia was Dominican. She apparently had no previous contact with him.

The shooting recalled the 2014 ambush killings of two New York City officers who shot in their cruiser by a man who approached the passenger window. The gunman, 28-year-old Ismaaiyl Brinsley, then killed himself.

Brinsley had announced online in the moments before the shooting that he was planning to shoot two "pigs" in retaliation for the police chokehold death of Eric Garner.

In the latest shooting, Bonds was captured on video leaving a convenience store, then moving tightly along the wall, pulling his hoodie over his head and walking purposefully toward the van. The video doesn't capture the shooting but shows him running from the scene with a gun in his hand, police said.

Familia, a mother of three, including a set of twins, spent her entire NYPD career in the Bronx precinct, where she worked the midnight shift. The command post had been set up since March, following a triple shooting, and was manned around the clock.

"She was on duty serving this city, protecting people, doing what she believed in and doing the job she loved," Mayor Bill de Blasio said at the hospital before Familia died. "And after this shocking and sudden attack, her fellow officers came to her aid immediately."

Officers stood at attention and saluted as an ambulance carrying Familia's body left the hospital.