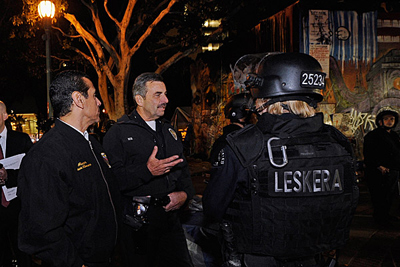 As he toured the former Occupy L.A. campsite, Mayor Antonio Villaraigosa on Wednesday morning praised Police Chief Charlie Beck and his officers for their professionalism and restraint in clearing the park around City Hall of protesters.

Villaraigosa said he was proud of the Police Department for carrying out what was a largely peaceful sweep of the park and surrounding streets. More than 1,400 officers were involved in the operation, and more than 200 arrests reported.

"I said that here in L.A. we'd chart a different path, and we did," Villaraigosa said.

He praised Beck's community-policing approach, noting that the chief and his officers had established a relationship with the Occupy protesters at the beginning of the seven-week demonstration. At one point, more than 1,000 people were camped on the City Hall lawn.

Beck agreed that the relationship had paid off.

By 3:30 a.m. Wednesday, police had cleared the plaza on the south lawn of City Hall of all protesters, except for a few people who remained in the trees.

Police had already begun to demobilize, and officers lined up to board buses back to their staging area at Dodger Stadium.

Before boarding the buses, many of the officers dipped their shoes into shallow decontamination pools.