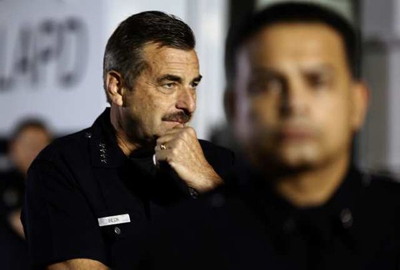 LAPD Chief Charlie Beck took in the scene of hundreds of his officers lining the City Hall lawn early Wednesday with a look of clear satisfaction and relief on his face.

"That was the hardest part," he said of the rush of officers into the park.

"That first contact, you learn if your officers are going to break ranks and if people are going to get physical," he said. "It went as well as we could have expected."

In a matter of minutes, officers poured out of City Hall and rushed in from the east and west. They established control of the park, essentially dividing it into several smaller sections.

It was a deft tactic, one that was a stark departure from old LAPD crowd-control techniques, Beck said.

In years past, a single skirmish line would have tried to sweep through the park, pushing people out, he said.

This new approach prevented protesters from joining together in a single group and allowed police to clear the park piece by piece.