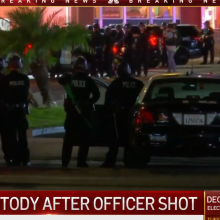 A Los Angeles police officer was wounded tonight at a Ralphs supermarket in Granada Hills during a confrontation with an armed, shirtless suspect, who was arrested and taken to a hospital for a medical evaluation although not hit by gunfire.

The shooting happened at about 6:30 p.m. Sunday in a shopping center at Balboa Boulevard and Devonshire Street, according to LAPD.

According to police, officers responded to the Ralphs after a man was reported to be causing a disturbance inside.

Video from a shopper showed the shirtless man standing on an object above people making hand gestures and talking, although his words could not be heard. It shows officers walking into the store but did not show the gunfire.

Witnesses told NBC4 the man fell through the ceiling and was standing on a freezer, pointing a gun at people inside.

After the shooting, the man fled the Ralphs and hid in a nearby store before surrendering to police about 45 minutes later. The details of that arrest were not immediately made clear.

One officer was transported to a hospital for medical treatment. Later, LAPD Chief Michel Moore tweeted: "Officer out of hospital with sutures to hand. Grateful."

The suspect's name was not immediately released, and it was unclear why he was taken to a hospital.