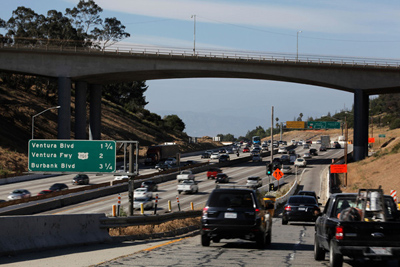 Mulholland Bridge across the 405 Freeway is slated for demolition soon, which will affect northbound and southbound 405 traffic. (Barbara Davidson / Los Angeles Times / May 26, 2011)

Warning motorists of potentially massive delays, transportation officials last week announced plans to shut down a 10-mile stretch of the 405 Freeway for 53 hours in July as part of an ongoing project to widen the expressway between the Westside and the San Fernando Valley.

Starting before midnight on Friday, July 15, until early Monday, July 18, the northbound 405 will be closed between U.S. 101 and Interstate 10 so that workers can demolish half of the Mulholland Drive bridge as part of the $1-billion widening project. A four-mile stretch of the southbound 405 will also be closed.

The prospect of shutting down one of the country's busiest highway stretches for an entire weekend at the peak of the summer travel season has transportation and public safety officials scrambling to avoid a regionwide traffic jam. That length of pavement carries roughly 500,000 vehicles on an average weekend.

The key to keeping road rage to a minimum, officials agree, will be communicating to residents and visitors early and often that they should stay home or steer clear of such neighborhoods as Westwood, Bel-Air and Brentwood that weekend.

"For people outside the area, from San Diego or Santa Barbara or Ventura, the big message for them is to avoid the Westside," said Doug Failing, executive director of highway programs for the Los Angeles County Metropolitan Transportation Authority.

The Getty Center in Brentwood will close to scholars and visitors on a weekend for the first time in recent memory. Tourists arriving at LAX will be advised to take a FlyAway bus to Union Station and explore destinations such as downtown Los Angeles, Universal Studios or Redondo Beach.

Local residents might do well to plan at-home activities that weekend. Firing up the barbecue or working in the garden will probably be much less stressful than driving.

Public safety, transportation and tourism officials are spreading the word via news outlets, email blasts, websites and social media. Angelenos can expect to hear a steady drumbeat of reminders as the countdown to closure progresses.

"My primary objective is that ... by July 15 every man, woman and child in Los Angeles County will know that the 405 is going to be closed that weekend," said Los Angeles County Supervisor Zev Yaroslavsky. "If people know ahead of time and make plans ahead of time, we will be able to get through that weekend with a minimum of angst and congestion."

Any motorists thinking of using Sepulveda Boulevard to get over the hill should think again. That route will be reserved for local residents, the MTA insists, and anyone using it should expect "extreme congestion and lengthy delays." For those who must travel through the area, the MTA recommends an array of interstate and state routes that read like a winning lottery ticket: 5, 14, 23, 57, 110, 118, 126, 134, 210, 605, 710.

Locals and out-of-towners will also be encouraged to embrace the saving graces du jour: Metro, Amtrak and Metrolink trains.

The freeway fun will begin as early as 7 p.m. on July 15, when workers start barricading ramps on both the southbound and northbound sides between the San Fernando Valley and the Westside. Lanes will start shutting down at 10 p.m. to ensure full closure by midnight. Workers will lay a 6-foot-deep bed of sand under the Mulholland bridge to protect the roadway from scrapes and gouges as 45,000 cubic feet of beams, girders and debris start coming down. The freeway is slated to reopen by 5 a.m. on July 18.

On the northbound 405, the entire 10 miles between the 10 Freeway and U.S. 101 will be closed. On the southbound side, a four-mile stretch between the 101 and the Getty Center Drive ramps will be blocked.

The MTA and the California Department of Transportation, its partner on the massive project, have been briefing officials from the Los Angeles police, fire and transportation departments and the California Highway Patrol, which are making contingency plans to deal with any local emergencies that arise during the weekend. They have contacted Los Angeles International and other regional airports, business groups, hotels, churches, trucking organizations, auto clubs, rental car companies and neighborhood associations.

Some hotels are encouraging people to visit the area the weekend before or after, said Mike McDowell, a spokesman for the L.A. Convention and Visitors Bureau. For royal watchers, the weekend before carries an added bonus: Prince William and Catherine Middleton, the duke and duchess of Cambridge, will be visiting the area.

"We will recommend that the airlines notify passengers that are already booked" of the closure, said LAX spokeswoman Nancy Castles. "We will be offering up all sorts of ideas, but we can't force people to use them."

The Mulholland Drive bridge, like the Sunset Boulevard and Skirball Center bridges, is being rebuilt to accommodate the addition of 10 miles of northbound carpool lane through the Sepulveda Pass. The extra lane will carry carpoolers and some drivers of hybrid vehicles all the way from Orange County to the San Fernando Valley.

More problematic was a July 16 wedding ceremony and reception at Skirball for which invitations had already been mailed. The couple opted to shift the festivities to July 15. It seems their guests will be getting out of the area just under the wire.

"I hope people will just stay ... away from the 405 corridor that weekend," Yaroslavsky said.

Staying away would be good practice. The July work will demolish the bridge's southern side. Once that has been rebuilt, another extended closure will be slated about a year from now so that workers can dismantle the northern side.