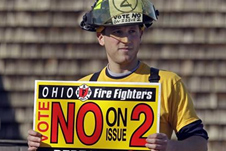 Thousands of volunteers on both sides of a public-union ballot measure made a final push to get voters to the polls Tuesday, in one of the year's biggest referendums on union benefits and bargaining rights.

COLUMBUS, Ohio-Voters on Tuesday defeated by a wide margin a law that would have restricted the powers of unions representing teachers, police officers and other public-sector workers.

The law would have stripped the state's 350,000 public employees of most of their collective-bargaining rights and forced workers to pay at least 15% of their health-care costs. With 97% of precincts reporting, 61% of voters in a referendum voted against the Republican-backed law, known as Senate Bill 5, while 39% supported it

The vote was closely watched beyond Ohio as other states have debated whether to rein in public unions to help governments cut spending on wages and benefits. Unions have faced bruising battles with newly elected Republican majorities in various states this year. In Wisconsin, lawmakers passed a law restricting union rights, but they failed to do so in Indiana.

The Ohio law was passed by the legislature and signed by Gov. John Kasich, a Republican, earlier this year. But opponents secured enough voter signatures to force a public vote before it could take effect.

"It's clear that the people have spoken," said Mr. Kasich. He said he would continue to work with local governments facing budget challenges but warned there would be "no bailout" because "there's no money."

GOP House Speaker William Batchelder predicted the more palatable elements of the law, such as higher minimum contributions on health insurance and pensions, are likely to be revisited after the dust settles.

Some Republicans said the party overreached in pushing through a bill before gaining broader public consensus. Despite many voters' feelings that some public workers have sweeter deals than those in the private sector, the legislation also was hurt by sympathy for "first responders" such as police officers and fire fighters.

Another big factor was heavy spending and strong organization by unions. The nation's biggest labor unions spent nearly $30 million to repeal the law. That was more than twice the amount spent by Republican-affiliated groups backing the law.

Mr. Kasich crossed the state over the past week, arguing that the law would preserve jobs by helping local governments trim labor costs and avoid service cuts or tax increases. Unions countered that limiting bargaining to wages, hours and certain conditions of employment was unfair and could endanger citizens if public-safety unions could no longer bargain over such matters as how many officers ride in police cars. They opposed other changes such as a ban on strikes and making it tougher to collect dues from workers who opt out of a union.

Both messages resonated with voters coming out of the polls Tuesday in a middle-class neighborhood in Columbus, the state capital. "Everyone's making cutbacks...and you see government employees not really taking the cuts the average Joe American worker is taking," said John Frederick, a 30-year-old manager of a nearby industrial laundry who favored the law.

But many voters sided with unions. "The idea that fire fighters and teachers are overpaid is preposterous," said Heather Reese, 25, a student at Ohio State University who voted to repeal the law.

A union-backed nonprofit called We Are Ohio raised $23 million from such donors as the American Federation of State, County and Municipal Employees to fight the law. The National Education Association, which represents 128,000 teachers in the state, spent $10.2 million on television ads and other expenses.