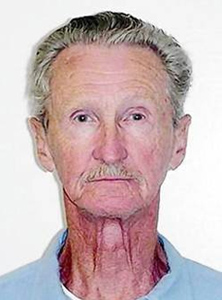 Gregory Powell got the death penalty for the 1963 kidnapping and murder of a Los Angeles police officer, but his sentence was reduced to life in prison when capital punishment was briefly outlawed in California in the 1970s. (California Department of Corrections and Rehabilitation)

Reporting from Sacramento -- Closing a chapter on one of Los Angeles' most infamous crimes, the state parole board Tuesday rejected the final bid for the release of "Onion Field" killer Gregory Powell, whose 1963 kidnapping and murder of a police officer shocked the city and shattered the myth of the untouchable cop.

Powell's doctor has found that the 78-year-old inmate is dying of prostate cancer and has six months or less to live, making him eligible for "compassionate release."

But during an hourlong hearing in the state capital, no one spoke on Powell's behalf.

In fact, authorities asserted, he prefers to die in prison. Members of the victim's family and the law enforcement community told commissioners that was just fine with them.

"The only way Gregory Powell should leave prison is in a body bag," said Pat Corral, a niece of Ian Campbell, the slain officer.

Scott Rate, a director of the Los Angeles Police Protective League, said Powell's life sentence "is not a sentence of 'imprisonment until a terminal illness develops.' It should be expected that he spend his last waking moments deprived of freedom."

Powell's abduction of Campbell and Officer Karl Hettinger stunned Los Angeles at a time when its officers were often viewed as impervious paragons of virtue. (That image was further battered by author Joseph Wambaugh's acclaimed book on the incident, "The Onion Field," and the subsequent film in which James Woods played Powell.)

The crime unfolded when the officers stopped Powell and Jimmy Lee Smith for an illegal U-turn on a Hollywood street.

It turned out that the pair had been looking to rob a liquor store. Powell pulled a gun, stuck it in Campbell's back, disarmed him and forced Hettinger to give up his weapon.

The men kidnapped the officers and drove north to an onion field near Bakersfield, where Powell shot Campbell. Hettinger escaped.

Wambaugh, an LAPD officer at the time of the killing, said the incident and his book changed police culture.

Although the department started to recognize the toll of post-traumatic stress disorder, he said, it also mandated that officers never surrender their weapons.

"To me that's wrong," Wambaugh said in an interview. "It should be left to the officer in the street that night facing the gun."

"His crime was not just the death of one police officer," Alexis de la Garza of the Los Angeles County district attorney's office told commissioners.

"His actions created a climate where violent criminals now place little value on the lives of police officers and accept that their murder is a viable option."

At Tuesday's hearing, Campbell's daughters - through a statement read by a Los Angeles police officer - asked the board to end the decades of parole hearings, court appeals and media coverage that have forced them "to rearrange our lives to fit the schedule of the beast" who took their father's life.

They reminded commissioners that as young children, they had to learn details about their father - his love of fast cars, music and his Scottish heritage - through his Marine Corps buddies and fellow police officers.

Standing at a podium, Stephanie LaPilusa, Campbell's great-niece, wiped away tears as she recalled leading petition drives against Powell's release while in junior high school.

"He was sentenced to death and, in order for justice to be served, that death needs to happen behind bars," she said.

After getting the death penalty, Powell's sentence was reduced to life in prison when capital punishment was briefly outlawed in California in the 1970s.

In its 10-1 decision Tuesday, the parole board said that Powell still represented a threat to public safety, in part because of a history of drug and sex violations while behind bars. He will spend his final days in prison, the board wrote, "where he wishes to remain."