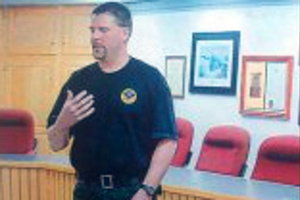 LOWER BURRELL, Pa. -- A man who fatally shot a western Pennsylvania police officer before the man himself died at the scene was a fugitive who had threatened police since he was charged in another shooting earlier this month, a prosecutor and police said.

"Obviously, officer Kotecki was a man of a great deal of courage. He was able to face a man who had actually threatened within the last week the officers of the city of Lower Burrell with physical harm," Peck told reporters at the scene.

Post has been a fugitive since an Oct. 2 shooting in the neighboring city of New Kensington. Both cities are about 20 miles northeast of Pittsburgh, along the Allegheny River.

Post was wanted on charges including attempted homicide and aggravated assault for allegedly firing several shots at his boss, Terry Janosky, 44, a New Kensington building contractor. Janosky told police he had a dispute with Post and agreed to meet him in a motel parking lot, only to have Post open fire when he arrived. Janosky was not hurt.

Councilman Joe Grillo and other officials at the scene characterized Post's shooting of Kotecki as an "ambush."

Lower Burrell police Chief Tracy Lindo and Peck told reporters that police learned Post was going to be at the Dairy Queen and converged on the business, with Kotecki - the city's K-9 police dog handler - among the first to arrive.

Police had reason to believe Post was dangerous, but a family member of Post's and some investigators said police were hopeful that Post was planning to surrender on the earlier shooting charges at the ice cream shop.

New Kensington Detective Sgt. Dino DiGiacobbe told the Valley News Dispatch that a Lower Burrell detective managed to contact Post on a cell phone and was trying to convince him to surrender.

But DiGiacobbe told the newspaper Post claimed to have a gun with 14 bullets: "Thirteen for the cops and one for me."

After shooting Kotecki, Post ran toward a wooded area behind the restaurant as other officers opened fire. Peck said he hopes an autopsy Thursday will determine whether Post died from police gunfire or a self-inflicted gunshot.

Alicia Heymers, co-owner of New Ken Auto-Motive across the street, told the Valley News Dispatch that she was cleaning in her business when she heard a commotion outside. She said she saw several officers with their weapons drawn, firing toward the woods behind the Dairy Queen along Route 366.

"There were a lot of shots, at least six or eight," Heymers said. "I thought (they were shooting at) a bear until I heard them yelling, 'Get down, get down!'"

Kotecki was a married father of two and one of 16 police officers, including Chief Lindo, in Lower Burrell, a city of about 13,000.

Lindo visited with the families of both dead men and expressed his grief to reporters at the scene.

"I know I'm devastated by this. Derek was a great, great officer," Lindo said.

"He was one of those police officers who everyone liked," she said. "He was fair, he was just and the kids liked him. ... The dog is taking it very badly, too."

Grillo, the councilman, told the Pittsburgh Post-Gazette that Kotecki "was one of those police officers who everyone liked. He was fair, he was just and the kids liked him."

"The dog is taking it very badly," Grillo said, as police said Kotecki's K-9 had to be muzzled and led away because the animal would not leave the slain officer's body alone.