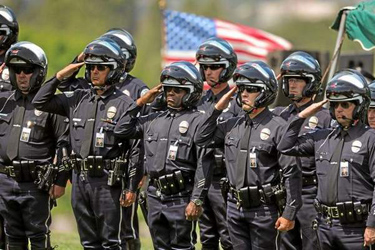 A Pacoima woman has been indicted for murder and other counts in connection with a 2014 crash into an LAPD motorcycle officer, who died four days after the collision, the Los Angeles County District Attorney's Office announced.

Qaneak Shaney Cobb, 35, pleaded not guilty to a grand jury indictment unsealed Tuesday that charges her with one count each of murder, gross vehicular manslaughter while intoxicated and possession of a controlled substance.

Officer Christopher Cortijo's motorcycle was struck from behind while he was stopped at a red light at Lankershim Boulevard and Saticoy Street in Sun Valley on April 5, 2014.

The impact left the officer trapped between the Chevrolet Blazer allegedly driven by Cobb and a Honda Accord that was in front of him.

Thousands of uniformed officers joined relatives and friends at his funeral at the Cathedral of Our Lady of the Angels.

In April of this year, City Councilman Paul Krekorian and LAPD officers were on hand as a sign was unveiled that names the intersection of Van Nuys Boulevard and Arminta Street as "Officer Chris Cortijo Memorial Square" in honor of the officer who was twice named officer of the year and who was credited with being involved in the arrests of more than 3,000 suspected drunken drivers in the San Fernando Valley.

Cobb was charged last year in connection with Cortijo's death and had been awaiting a hearing to determine if there was enough evidence to require her to stand trial. That case is expected to be dismissed as a result of the superseding indictment.

Prosecutors allege that she has prior convictions for grand theft and drug possession.

Cobb -- who has remained jailed since her arrest shortly after the crash -- is due back in a Van Nuys courtroom for a pretrial hearing Oct. 26.