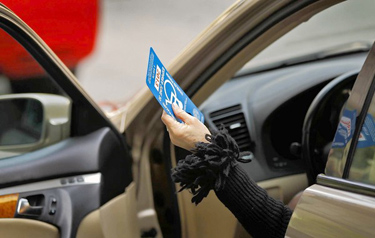 DMV investigators collect a disabled placard from a motorist during a sting in Beverly Hills in April. (Al Seib / Los Angeles Times / April 12, 2011)

Cris Lombardi, a Hollywood camera operator and downtown Los Angeles resident, loves strolling the city when he's not working. In particular, he likes photographing buildings under construction, such as the Broad Museum.

"Walking the same route every day, one begins to notice details," he wrote to me two weeks ago in an email. "On my walk up 4th Street from Hill to Olive, it dawned on me that ... nearly all of the parked cars had handicap placards."

The cars were at expired meters with flashing red lights. Yet they stayed there, unticketed, often for an entire day even if the street had a one- or two-hour limit. Lombardi then noticed that on surrounding streets too, placards hung from rear-view mirrors like ornaments. Working with pen and pad, he found two streets in which 80% of the cars parked at meters had placards. On the six downtown blocks he checked, the average was 64%.

Lombardi never saw anyone get in or out of a car with a placard, but he had a hunch that they might not all be disabled. That meant that genuinely disabled drivers had fewer spaces available, and so did drivers without disabilities.

On Monday, Lombardi and I toured Bunker Hill together, and clearly he was onto something. On 4th Street between Olive and Hill, disabled placards hung in eight of the 10 cars. That street is on a fairly steep incline. Not exactly easy going for anyone disabled enough to need a placard.

Next we went up to Hope Street between 3rd and 4th, where all three parked cars on the east side of Hope had placards. I saw a man with no obvious disabilities walk to a Toyota van with a red, or temporary, placard, and asked if he would mind telling me about his disability.

"I had a heart attack," he said before driving away.

On 3rd Street between Hope and Grand, six out of seven vehicles had a disabled placard. On Grand, six of the first seven cars I checked had placards. I saw three cars across the street, and every one had a placard.

I'll get to that in a minute, because at the end of the workday Monday, I staked out 4th Street and waited for drivers to return to their cars. But in the meantime I made some phone calls, eventually tracking down a true expert on the subject.

Jonathan Williams spent a week at the intersection of 7th and Hope a few years ago and wrote a thesis on this very subject while at UCLA.

He recalled one driver who exited a van with a disabled placard and loaded boxes onto a hand cart before descending a flight of stairs. Williams, now a traffic consultant in Seattle, said that in California, if you've got a placard you can park at a meter for free for as long as you want, no matter what restrictions are imposed on other cars. This invites abuse in a place like downtown L.A., where parking in a garage can cost $20 or $30.

When investigators target a specific area, they find that placard abuse "runs in the area of 30-40%," says Vito Scattaglia, deputy chief of investigations for the state Department of Motor Vehicles. And when you consider the state has issued more than 200,000 disabled placards, that's a lot of abuse. A common scam, Scattaglia said, is for a driver to use the placard his granny got legitimately. Another scam involves applications with forged signatures from doctors.

So what's this costing the city?

No one knows. But the city collected $40 million from its 40,000 parking meters last year, said Jaime de la Vega of L.A.'s Department of Transportation. And in the downtown area, where meter rates are high, there's a lot of potential for revenue - as long as the meters aren't all being taken up by able-bodied people parking for free.

UCLA professor Donald Shoup said several cities around the country have begun charging disabled drivers to park. But in California that would require state legislation, and there's been a reluctance on the part of any legislator to step up. Shoup also said officials in Capitola, near Santa Cruz, employ disabled military veterans to police the abuse of disabled placards, which sounds like an excellent idea.

I think we can all agree that people with legitimate disabilities have enough challenges without having to compete for parking spaces with scammers. But having more designated spaces for disabled drivers and limiting them to the posted time limits seems fair to me. I spoke to merchants who complained that having a car anchored in front of their shop all day isn't good for business because the space never turns over.

At quitting time Monday evening, I waited on 4th Street to see who would be returning to the cars with the placards. I understand that not every disability is visible, so I'll report what people said to me without making judgments.

A woman who got into a Toyota told me she works at the state office between Hill and Broadway and has respiratory problems. Another state employee got into a Scion before I spotted her, but she told me she'd had leg surgery.

And then a Volkswagen pulled up with a placard, and two guys got out. The driver went to the meter to pay, but the passenger stopped him, saying something I couldn't hear, and they began to walk up the steep hill. When I asked who was disabled, the passenger, with a smirk, told me he had "a heart condition," and they continued up the hill.

Next, I watched a man limp across the intersection of 4th and Hill on the way to his BMW from his job at the state building. He told me he has osteo-arthritis and is considering a hip replacement. But playing devil's advocate, I pointed out the two parking lots at the intersection, both of them closer to his office than the meter, where he had parked for free all day.

"They're very expensive," he said. True, as I'm sure his colleagues without placards have discovered when they have to purchase monthly parking.

When he drove off, I saw a man coming down 4th at a steady gait and I moved in his direction, pen and pad at the ready. He then broke into a trot, jumped into a car with a disabled placard and hit the gas to make a clean getaway, staring me down as he fled.

So he won that one. But I could be back.