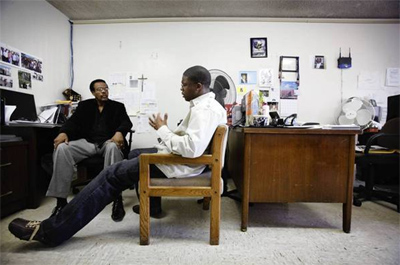 James Croom, left, a counselor at the Watts Healthcare Corp.-House of Uhuru, meets with former prisoner Terrell Barrow, who was released in mid-October after serving three and a half years for drug dealing. Barrow said that during his time at the center, he's learned to better manage his anger and cope with his drug cravings. The cost of his rehabilitation is more than $17,000, none of which is covered by L.A. County. Overall, the House of Uhuru is nearly $280,000 in the red, an agency official said. (Barbara Davidson / Los Angeles Times / April 1, 2012)

A sweeping plan to make local officials responsible for supervising thousands of released prisoners previously monitored by the state has gotten off to a bumpy start in Los Angeles County.

Many of the ex-criminals are not showing up for counseling appointments, some care centers are not being paid and county bureaucrats are scrambling to correct foul-ups that have caused delays.

About 6,000 prisoners were shifted to county supervision under a realignment law signed last April by Gov. Jerry Brown. The intent was to cut state costs and reduce severe prison overcrowding by keeping nonviolent felons in local jails instead of transferring them to the state system. As part of the plan, the supervision of probationers was also shifted to counties.

To help pay for the local oversight, state lawmakers provided $112 million to the county - by far the largest recipient of prisoners on probation - and promised more in the future.

But most Los Angeles County supervisors have been critical of realignment from the beginning, saying the state was trying to pass costs to local government and fearing that a rise in crime would occur once prisoners started getting released.

In the six months since, about a quarter of the probationers have been arrested for allegedly committing new crimes, which is below the previous state average for probationers. But some politicians and community activists worry that the numbers could climb further, especially since about 10% of released convicts are not attending meetings or have gone missing, according to the most recent county statistics.

Supervisor Mark Ridley-Thomas said last week that it is too early to draw conclusions. "We have to get data which we can rely on," he said. "I'm not sure we have that at this point."

Ridley-Thomas also said the county was partly to blame for its slow progress on realignment. Supervisors took two months to approve a $4-million housing and transportation contract with the prominent San Francisco-based provider Haight Ashbury Free Clinics-Walden House, in part because the sheriff's and probation departments were arguing over who would oversee the newly released prisoners.

"There's no denying there was a lot of time lost and possibly wasted," Ridley-Thomas said.

Haight Ashbury did not start providing services to the former prisoners until February and referred only 157 of them to places where they could receive job training and housing as of March 12, according to county statistics. Probation officials say the pace of referrals has picked up since then, and Haight Ashbury officials say they have made 401 referrals in all.

Ridley-Thomas has proposed that probation officials consider consolidating services at central locations, making it easier for probationers to make appointments, undergo examinations and obtain housing without having to travel.

As of now, ex-offenders must sometimes travel far to get services because not all are in the same location.

Because other local groups had services to offer, county probation officials also tried to offer contracts to additional providers. But the application was so bulky and confusing, it was quickly recalled.

"I know a number of you had already been working" on the application, said Reaver Bingham, a deputy chief with the Probation Department, said at a recent public meeting. "I know there may be a measure of frustration ... but I beseech your patience."

Some smaller community groups also began helping recently released prisoners, even though it was unclear if they would be reimbursed.

Probation officials said the new application will be ready within 60 days. Many community groups say that will not be fast enough, especially because many of them have been helping ex-prisoners since realignment began and before the county had a contract to provide services.

The Watts Healthcare Corp.-House of Uhuru, a residential treatment facility in Watts, took in 15 extra patients who were recently released from jail, including Terrell Barrow, who was released in mid-October after serving three and a half years for drug dealing.

Barrow said that during his time at the center, he's learned to better manage his anger and cope with his drug cravings by attending group and individual meetings.

"You've come a long way. You really have," James Croom, Barrow's counselor, told the former prisoner during one of their weekly sessions.

The cost of Barrow's rehabilitation is more than $17,000, none of which is covered by the county. Overall, the House of Uhuru is nearly $280,000 in the red, said Wendell Carmichael, the facility's director of social health programs.

"I'm clear that I can't go down this road much longer," he said.

The Watts Healthcare Corp. normally treats patients on a first-come, first-served basis, but Carmichael said the organization will soon have to stop accepting new clients.

"I'm not sure what the other people will do," Carmichael said.