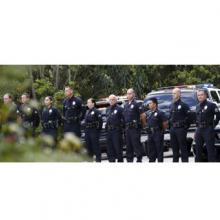 LAPD officers stand in line outside the estate of former U.S. first lady Nancy Reagan, who died at the age of 94, in the Bel-Air neighborhood of Los Angeles, California March 6, 2016. (REUTERS/Jonathan Alcorn)
Kerry Picket
Daily Caller

The organization posted a blog post critical of the commission's recent decision to find that fault lay upon an LAPD officer who used deadly force when a female suspect, Norma Guzman, came at him and his partner swinging a large knife.

"The key facts in this case are not in dispute. A female suspect, armed with an 8 to 9-inch knife, charged at officers, repeatedly ignored commands to stop, and was recorded yelling 'shoot me' as she swung her knife from side to side," the LAPPL Board of Directors wrote in a blog post.

The armed suspect immediately closed the space between her knife and the police officers from 70 feet to no more than 5 feet in less 10 seconds. At this point, the first officer shot from his service weapon.