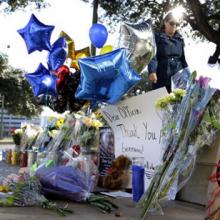 The shootings of police officers in Texas and Missouri on Sunday were the latest in what law enforcement officials say is an alarming spike in ambush-style attacks.

One-third of police officers shot to death on the job this year were purposely targeted by their assailant, according to the National Law Enforcement Officers Memorial Fund.

The San Antonio detective was writing a traffic ticket in his squad car Sunday morning outside police headquarters when he was shot to death. A St. Louis police sergeant who was shot twice in the face Sunday evening while he sat in traffic in a marked police vehicle is expected to survive.

Police officers were also shot and injured during traffic stops in Sanibel, Florida, and Gladstone, Missouri, on Sunday night, but authorities have not suggested those were targeted attacks.

"Officers are at tremendous and growing risk; they're being targeted because of the uniform they wear and the job they do," said Craig W. Floyd, president of the National Law Enforcement Officers Memorial Fund.

Growing concern
San Antonio Detective Benjamin Marconi was the 60th officer shot to death this year, compared to 41 in all of 2015, and the 20th to die in an ambush-style attack, compared to eight last year, Floyd said.

This year's targeted killings are the most since 1995, Floyd said. In fact, Marconi's was the fourth targeted slaying of an officer this month: On Nov. 2, two Iowa officers were killed in separate but related attacks. And on Nov. 10, a Pennsylvania officer was targeted as he responded to a domestic disturbance.

"It is unusual, alarming and a real problem," Floyd said, adding that 44 officers have been killed in targeted attacks in the past three years.

Element of surprise
An ambush-style attack does not necessarily involve someone lying in wait for police officers; it's any shooting designed to catch police off-guard and put them at a disadvantage, Floyd said.

"There usually is an element of surprise and concealment involved," he said, and it's unprovoked.

Police have been killed while writing reports, like Marconi was, or eating in restaurants. They've responded to 911 calls, only to have people shoot them as they get out of their cars. And in the Dallas shooting, they were targeted by someone in a building.

"In all the cases, the officers were essentially assassinated before they had any contact with the suspect or placed that suspect in jeopardy," said Nick Breul, the Memorial Fund's director of officer safety and wellness.

Race not the biggest factor
The attacks on police in Dallas and Baton Rouge came amid protests over the shootings of black men by white officers, and were carried out by black gunmen - but race is not always a motivating factor, Floyd said.

In fact, he said, white men are responsible for most police slayings, and the majority of people shot and killed by poIice are white.

Some officers have been killed by people who identify with the so-called sovereign citizen movement, whose adherents believe they're immune to most state and federal laws, including paying taxes and getting driver's licenses. Gavin Long, the Baton Rouge shooter, had filed documents last year declaring himself sovereign.

The man who shot and killed the two Iowa officers earlier this month as they sat in their patrol cars had a history of contacts with police, including a recent confrontation with officers at a high school football game. Others have been mentally ill.

"So much dialogue has centered around race relations, but there is a hatred in this country right now that's just gotten out of control," Floyd said. "There is a lack of respect for government in general, and the most visible and vulnerable symbol of government in America is patrolling our streets in marked cars."

Trying to stay safe
Departments around the country are doing everything from pairing up officers to installing new technology on cruisers in an effort to keep officers safe.

Putting two officers in each squad car is more expensive and might mean that fewer calls can be handled at once, Floyd said. But he added that it's a good approach "if there is a greater sense of safety," even if officers aren't necessarily safer in pairs.

Other departments are installing sensors on squad cars that can alert officers when someone approaches.

Still, training is the best weapon, Floyd said. Officers are being reminded to practice "situational awareness," to expect the unexpected and to "never take any assignment for granted," he said.

"Every law enforcement officer is now keenly aware of being targeted," he said.