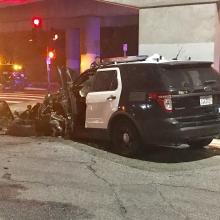 A police sergeant was injured after her vehicle was struck intentionally by a domestic violence suspect who then fled the scene in Culver City early Tuesday morning, officials said.

The suspect's silver Cadillac Escalade crashed into the Los Angeles police SUV around 1:20 a.m. near the intersection of West Centinela Avenue and Bristol Parkway, according to an LAPD official at the scene.

The police vehicle — with its driver's side portion a mangled mess, appearing to have crumbled in to the point where the wheel and axle were no longer attached — was seen being towed from the crash site hours later, around 7 a.m.

In a tweet, Los Angeles Police Officer Kenny Lew said the sergeant sustained several injuries and was "Lucky to be alive."

The sergeant, a woman, suffered broken bones and was in serious but stable condition, LAPD said. She had to be extricated from the wreckage before being taken to a hospital, the L.A. Fire Department said in a tweet.

The sergeant's name was not immediately released.

It's unclear why she may have been targeted by the suspect, who police said was wanted in connection with a domestic violence incident in Inglewood.

The suspect also side-swiped the Ford Fusion of woman involved in the domestic incident, officials said. The woman was cooperating with investigators.

Further details on the domestic incident were not immediately released, but authorities said the suspect may be armed.

Detectives are now searching for the hit-and-run driver, who Lew indicated could be wanted for assault on an officer.

California Highway Patrol was assuming control of investigation, which remained active. No further details were available.