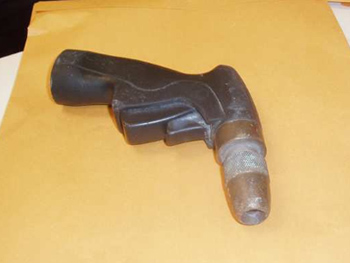 A 35-year-old Long Beach man was killed in an officer-involved shooting in 2010 when Long Police officers opened fire when the man pointed a water nozzle like this at them. (Long Beach Police Department)

The names of officers involved in shootings are public information subject to disclosure by law, a California appellate court ruled Tuesday, marking the latest legal opinion in a public records court battle that has embroiled law enforcement and the media.

The 2nd District Court of Appeal rejected arguments from the city of Long Beach and its police union that officers' names were protected as investigative and personnel records and because of officers' privacy rights.

The decision upheld a Superior Court judge's order that the city would have to release the names in response to a public records request from The Times.

The Times had asked the city for the identities of all Long Beach police officers involved in shootings over a five-year period after a December 2010 shooting of an unarmed man holding a garden hose nozzle. Attorneys for the newspaper have argued that disclosure was a matter of vital public interest to hold police accountable and have criticized unions for delaying the release through litigation.

The unanimous opinion from the three-justice panel was written by Justice Kathryn Doi-Todd, who asked an attorney representing Long Beach during oral arguments if the city's reading of state law was "expanding the concept of personnel records."

In Tuesday's opinion, the justices found that officers' names were not covered by exceptions built into the California Public Records Act, and that disclosure would not be an invasion of privacy because "an officer's privacy interest in maintaining the confidentiality of his or her name does not outweigh the public's interest in disclosure."

The court also wrote that the union and the city failed to offer any evidence of specific threats to officers' safety that would result from disclosure beyond "generalized safety concerns."