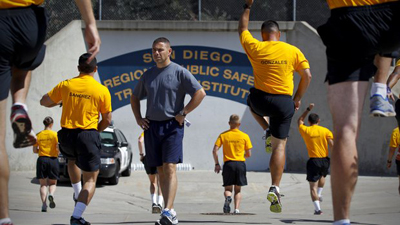 Alan Alvarez recently turned 50. After 28 years as a San Diego police officer, he's eligible for retirement but not ready yet to call an end to his career.

He's been contacted about other jobs. He's watched as fellow officers left for better pay and benefits at other law enforcement agencies.

"I don't want to leave," Alvarez said. "I'm not in a big hurry to leave. But I think we have to look at the economics of the whole thing."

Alvarez is among the roughly 900 San Diego police officers - about half the current force of 1,833 - eligible for retirement over the next four years. That's a troubling statistic for a department that already has 300 fewer officers than a decade ago.

At the same time, the city is struggling to keep its best young officers from leaving, some of whom are being lured by other law-enforcement agencies that are promising more take-home pay and offering $5,000 signing bonuses. Three out of every 10 officers hired by the city since July 1, 2005, have left, the equivalent of about eight percent a year.

An argument could be made that the city's shrinking police force fits the times. Crime levels are near historic lows so the department has clearly been able to adapt with fewer officers. A recent study commissioned by the U.S. Justice Department showed the recession forced many communities to downsize their law enforcement agencies and rethink decades of policing strategies.

Still, the concern at City Hall is how long the Police Department can continue performing at a high level before it reaches a breaking point.

It's not hard to surmise why officers would choose to leave the San Diego Police Department. Officers took a 6 percent compensation cut in 2009 that has yet to be restored and a health-care plan enacted under former Mayor Jerry Sanders has seen out-of-pocket costs soar for officers in recent years. In addition, officers pay a larger portion toward their pensions than their counterparts at most other agencies.

All of those factors contribute to less take-home pay. For example, two officers recently left San Diego to join the Chula Vista Police Department. Why? Their take-home pay increased by $1,100 or more per month because of lower health care and pension costs. They could do roughly the same job and bring home more money without having to uproot their families to another region.

Police officials and union leaders have been ringing the alarm bell for this pending personnel crisis for several years now, but city leaders have been unable to take much action because of San Diego's decade-long fiscal woes.

The main response by Sanders and current Mayor Bob Filner has been to increase the size of police recruiting classes. Critics say that approach is helpful but liken it to filling a bucket without plugging the holes in it first.

For example, at the current attrition and recruitment rates, the Police Department won't reach its desired staffing level of 2,128 officers for at least a decade. Of course that's assuming the pending retirement bubble is gradual rather than an instant explosion.

The city is currently negotiating with the Police Officers Association on a new five-year labor deal that will almost certainly result in a compensation hike although the terms being floated had officers complaining "Hello Tijuana PD" on the police radio last week.

With that as a backdrop, a recent City Council committee hearing on retention issues could be viewed cynically as a ploy for more pay. But even one of City Hall's harshest critics, taxpayer advocate Richard Rider, says the concerns appear real.

"The market is speaking," Rider said. "It's a supply-demand problem. Unlike most government jobs, the ratio is the opposite of what we normally find. It's hard to get and keep qualified applicants. That's why the police officers' pension is different than the fire department's pension and all the others. If supply and demand justifies a pay increase, I don't have a problem with that."

San Diego isn't alone in its difficulties with police personnel.

The recent recession saw a downward trend in law enforcement staffing levels nationwide for the first time in 25 years, according to data compiled by the U.S. Justice Department. In 2011, there were about 12,000 police officers and deputies laid off, 30,000 vacant positions and 28,000 personnel taking furloughs.

The recession did have an effect though. Sanders canceled the police academies in fiscal 2010 to save money. With no recruits coming in the door, the overall staffing level dropped by nearly 100 officers that year.

There's been little civic outrage over the shrinking police force largely because the city's crime levels have steadily dropped, leading to a 42-year low in 2011.

The latest figures, however, aren't promising. Crime in the city increased by 6 percent, to 37,000 incidents, in 2012 and response times by officers were getting worse.

Filner, who pledged funding for public safety during his mayoral campaign last year, called the staffing levels and compensation for officers "dangerously low" and said he wants to increase both.

"I'm trying to work on all of them within an existing budget that is very constrained," Filner said. "We've got to stem the tide and we're not going fast enough and I'm going to try to go as fast as we can."

Specifically, Filner has proposed increasing the number of recruits for next year's four academies from 30 to 34.

Brian Marvel, president of the Police Officers Association, compared that approach to putting a Band-Aid on a gaping wound.

"It helps but without fixing the compensation package you're not really addressing the real issue," he said. "People enjoy this job. I think they just want to be compensated fairly and competitively for the value that they bring to the city. ...If you went to work every day and every day you're getting beat up, would you want to stay here?"

Besides the 2009 compensation cut, officers have seen out-of-pocket health care costs skyrocket in recent years. For example, the association says an officer with a family plan will see his costs increase $2,066, or 32 percent, when the new fiscal year begins July 1.

Assistant Police Chief Shelley Zimmerman said it's all about take-home pay for officers. She's been tracking the department's retention and recruiting issues to give regular updates to the City Council. She said the market for police officers is "very competitive" and pointed to the $5,000 signing bonuses offered by the San Diego County Sheriff's Department and Chula Vista PD as examples.

"We have a great reputation and people do seek out San Diego police officers because of our reputation," she said.

At least 36 officers in the past three years have left for other law enforcement agencies. The actual tally could be higher as departing officers aren't required to say why they're leaving. The average length of service for those officers was six years, which means other agencies are poaching young officers as they reach the prime period of their career after San Diego invested money to train them.

On the recruiting side, San Diego is still filling its academies, but it's not easy. This year's four academies have 123 recruits but 46 other qualified candidates either declined a job offer to go elsewhere or opted out of the process. That means San Diego is no longer getting its pick of the top candidates available.

On top of that, not every recruit who finishes the academy elects to stay with SDPD. Eight graduates from the past two years are no longer with the department. The estimated cost for a recruit's first year is $191,000.

Zimmerman said the solution is a balanced approach.

"We have to continue to get people in the front door because we have to talk about succession planning and then it takes many years to develop a skill set for many of these specialized assignments," she said. "What we're saying is if we can keep the people that we have (longer) and lower out attrition rate then maybe we don't need as many people coming in the front door. We can stabilize."

For Alvarez, who is retirement eligible, the department has changed significantly in his nearly three decades on the force.

"Being on all this time, I saw the evolution of where the department's been and where we're at right now," he said. "I get concerned when I see officers right now - good officers - that we lose to other agencies. ...If we decide to recruit more, give more incentive and raise the pay, it's going to take us a couple of years just to play catch up to where we need to be. It's not an overnight solution."

A new police contract that begins July 1 is expected to be signed in the next few days. Whether the as-of-yet unspecified compensation increase is enough to satisfy officers and recruits remains to be seen.