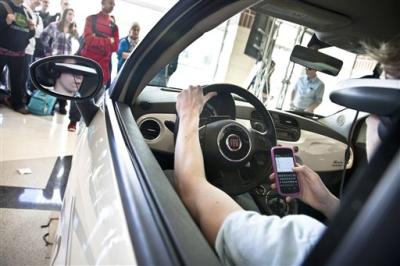 Freshman student Ben Fisher texts and virtually drives in the Texting and Driving Simulator at Central York High School Friday, March 8, 2013 in Springettsbury Township, Pa. AT&T and Peers Awareness developed the simulator for teenagers to get hands on experience while distracted on the road. (AP Photo/York Daily Record, Sonya Paclob)

As part of distracted driving month, which started Monday, police across Southern California will be ticketing for texting drivers, those holding a cellphone to their head or drivers whose attention wanders for any reason.

Dozens of police agencies have planned targeted operations for April 3-16, which has been designated a maximum enforcement period. Wednesday will be zero-tolerance day, when officers will give tickets only -- no warnings.

In Pasadena, Friday will be maximum enforcement day, according to Lt. Pete Hettema said.

Tuesday at 8 a.m., California Highway Patrol officers and Burbank city officials will be at John Burroughs High School to impress upon students the importance of paying attention while driving.

In April 2012 alone, about 57,000 people statewide got tickets for driving while distracted, and about 450,000 people were ticketed during the entire year.

In 2011, about 3,300 people died nationwide in accidents involving at least one distracted driver, according to federal highway safety officials.

According to studies cited by law enforcement, young, inexperienced drivers are most susceptible to having an accident because of distracted driving. Drivers using any kind of handheld electronic device are about four time more likely to have a wreck than drivers who are not using them.