Skip to main content
13
May 2013
Police Week: Honoring the Fallen 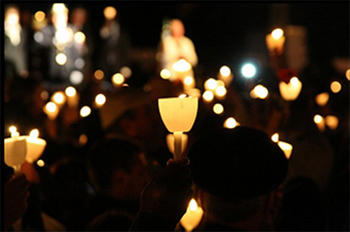 Thousands of law enforcement officers from around the country gathered last night at the National Law Enforcement Officers Memorial for a candlelight vigil to honor fallen officers. The names of more than 19,000 men and women grace the memorial's marble walls. On Monday, 321 new names were officially added, including 120 who died last year. The names of the fallen were read aloud after thousands of participants passed a flame from candle to candle. In remarks to participants, Homeland Security Secretary Janet Napoitano saluted those who wear the badge.

"Heroes, patriots and role models who did not flinch at the first sign of danger," she said, "but like all law enforcement, acted to protect us even though their lives were on the line."

"They helped to make this world a far better, and safer, place," Holder said. "And, despite the fact that these brave officers were taken from us far too suddenly - and far too soon - their legacies, and contributions, will always endure."