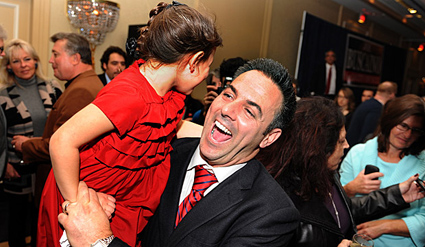 Joe Buscaino and his daughter celebrate Tuesday at the Crowne Plaza in San Pedro after he took an early lead over Warren Furutani in the race for a City Council seat. (Wally Skalij / Los Angeles Times)

Police Officer Joe Buscaino, a political newcomer who captured an open Los Angeles City Council seat in a decisive win over a seasoned opponent, said in a victory speech late Tuesday night that he is an "average Joe" who is part of a "new generation of leadership."

Preliminary results show Buscaino won 60.7% of the votes cast in the runoff for the 15th Council District, with Assemblyman Warren Furutani earning 39.3%. A total of 16,112 votes were cast, which means that just under 16% of registered voters took part in the election.

In November, Buscaino squared off with 10 other candidates in a special election to replace Janice Hahn, who was elected to Congress. On Tuesday, he told supporters at an election-night party in downtown San Pedro that his campaign had beat all odds.

"Just six months ago, they said, 'Oh no, Joe -- he's too young, he's too inexperienced. He can't raise money. He does not have the name recognition,'" the 37-year-old Buscaino said. "Ladies and gentlemen, we have proved them wrong!"

He added that his win, "proved that an average Joe can make good with a little help from family and friends."

Many of Buscaino's campaign contributions came from inside the 15th District, which takes in San Pedro, Wilmington, Harbor City, Harbor Gateway and Watts. But he also benefited from more than $500,000 in spending by independent groups, including the police union, business groups and a union representing employees at the Department of Water and Power.

Despite the support, Buscaino has promised that the desires and needs of those within the district will be the only "special interests" that sway him.

"There's a tremendous sense out there that our elected officials have lost touch with the people they represent and the communities they set out to serve," he told supporters. "I can assure you of this, ladies and gentlemen, this average Joe knows where he comes from and will never forget it."