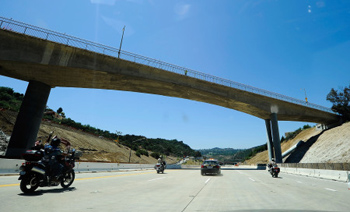 Portions of the 405 Freeway through the Sepulveda Pass will be closed Tuesday through Friday nights for work on the Skirball Bridge.

Crews will install girders during the closure, which will begin in stages for the southbound lanes, Metro said.

Freeway ramps will begin closing at 7 p.m. Tuesday with some lane closures taking place by 10 p.m.

Full closure is expected by midnight and will last through approximately 5 a.m.

The same portion of the northbound 405 Freeway will be closed during the same times on Wednesday and Thursday and from 1 a.m. to 6 a.m. on Friday, according to Metro.

The Skirball Bridge will be closed all four nights from 10 p.m. to 6 a.m.