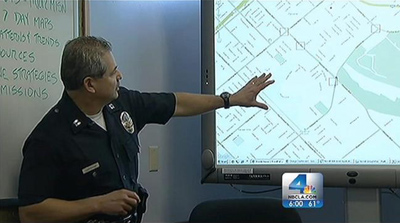 Crime is on the decline in Los Angeles for the 10th straight year, according to a new report released by the LAPD Monday. The trend may continue as police try out a new way of predicting crimes before they happen. (Image: Patrick Healy)

At a growing number of Los Angeles Police Stations, during roll call, every patrol officer is handed a mission map marked with one or more small squares. Each square denotes a real location in the officer's patrol area, 500 feet by 500 feet, in which a computer algorithm predicts a crime is going to take place that day.

Between responding to radio calls and emergencies, officers are expected to spend time "in the box" to deter the predicted crime.

It's called "predictive policing," and it promises to change the way police deploy their resources.

"I'm convinced that predictive policing works," said LAPD Capt. Sean Malinowski, who worked with the team of academics that developed the algorithm for turning crime data into crime forecasting and who holds a doctorate degree in public administration.

The forecast can be updated repeatedly during the course of a day, but Foothill's policy is to focus on two forecasts: one for day watch, the other for evening watch.

In the past year, predictive policing has spread to seven more of LAPD's 21 geographic divisions.

"Soon it will be in more than half," said Chief Charlie Beck during his annual crime statistic briefing Monday in which he also announced the city's 10th straight year of falling crime.

Predictive Policing, also known as "Pred Pol," was spearheaded by two university professors: George Mohler, PhD, an assistant professor of Mathematics and Computer Science at Santa Clara University, and P. Jeffrey Brantingham, PhD, a UCLA anthropologist who has focused on mathematical and simulation modeling of crime.

Much of a forecast, 80 to 90 percent, overlaps what's generated by traditional analysis of crime data for "hotspots," said Malinowski. "It's in the margins where we make up the difference," he added.

So far, LAPD has not attempted to use predictive policing for violent crimes, which again in 2012 continued a downward trend that dates back more than a decade.

Reducing property crimes has proven more of a challenge.

Both Malinowski and Foothill Patrol Capt. Stephen Carmona expect the applications of predictive policing will be expanded. But they emphasize it is not a cure-all, and cannot replace intelligence gathering.

"We also have to listen to the word on the street from our seasoned officers, from the arrestees, the detectives and the homeowners with whom we've established partnerships," Carmona said.

Typically, when officers go to a forecasted crime location, they are expected to spend 20 minutes, a significant amount of time for an area so small. It is time to walk a foot beat and talk to persons they encounter at businesses, homes or on the street.

Citizens hearing of predictive policing for the first time are impressed.

"I think they should really utilize that program," Marvella Harbin said Monday afternoon, as she walked past the intersection of Van Nuys and Glenoaks boulevards, which happened to be inside one of the boxes in that day's forecast.