President Obama Monday awarded the Medals of Valor to four Southern California police officers, who risked their lives to save others.

Los Angeles police officer Donald Thompson was among the honored. He was recognized for his "courageous action to save an accident victim" on Christmas Day in 2013. The bomb squad officer was off duty and on his way to work when he saw a car slam into a center divider on the 405 Freeway and catch fire in Sherman Oaks.

Thompson got out of his truck and ran straight toward the burning vehicle.

Speaking to CBS2/KCAL9's Rachel Kim on the phone from Washington, DC Monday night, he said: "I jumped over the K-rails, and I managed to force the driver's side door open.

He said the flames made it tough and painful to get the seatbelt off the unconscious driver.

Despite the first- and second-degree burns to his hands, he found the inner strength to reach in and grab the victim, pull him out and drag him to safety.

"You're so proud. People were there. You're being acknowledged," Thompson said.

Thompson said it was an unforgettable moment for him and he will never forget what President Obama said to him after the commander-in-chief struggled to get the medal around the neck of the 6-foot-7, 270-pound officer.

"Someone told me he got on his toes when he reached across my shoulders. However, after he got it around my neck, he had made a comment that he had put a metal around Bill Russell," Thompson added. 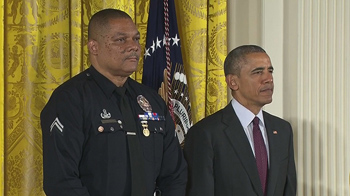 Santa Monica police officers Jason Salas and Robert Sparks, along with Santa Monica College Police Capt. Raymond Bottenfield were also recognized for their actions during the June 7, 2013, shooting spree that began just northeast of the college and ended with a rolling gun battle on the campus.

The three officers responded to the campus and confronted the gunman in the campus library, ordered him to drop his weapon, then opened fire when the gunman pointed his assault weapon at them.

The gunman, John Zawahri, 23, was killed. Police said Bottenfield was in plain clothes and was not wearing body army when he helped confront the suspect.

Zawahri had killed his father and brother at their home near the college, then set the house on fire before making his way to the campus, where he fatally shot three more people.

"Officer Salas, Officer Sparks and Captain Bottenfield placed themselves in mortal danger to save the lives of students and staff during a school shooting on the busy campus of Santa Monica College," according to the White House.

The president said all of the officers acted "without regard for their own safety." Because of their courage and instincts, he said, the rest of society can go about their lives each day "like it's any other day."