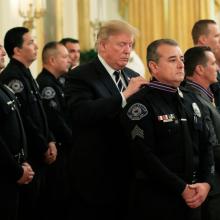 On Election Day in November 2016, a gunman went on a deadly rampage in an Azusa neighborhood, killing one and injuring three others with a rifle and handgun near an election polling place.

In a ceremony Wednesday, eight Azusa and Irwindale police officers were honored at the White House with the Medal of Valor for their response to the Election Day shooting, which ended when officers gunned down the shooter in front of his house.

The medal is the nation’s highest honor for bravery by a public safety officer.

“To each of you, you represent the unity, devotion, teamwork and swift action that makes America’s law enforcement the best and bravest anywhere in the world,” President Donald Trump said during the White House ceremony.

The Southern California officers were among a larger group of law enforcement officers and fire officials presented with the medal, which is given after police or fire chiefs nominate their officers as recipients and are recommended by a review board of 11 fire and police chiefs.

On the day of the shooting, Nov. 8, 2016, Plascencia and Torres ran through gunfire from the suspect toward a woman who had been shot in the head, Trump said. Smith, Rodriguez, and Chapman were returning fire at the suspect. Avila, Wenrick and Campos drew the gunman, 45-year-old Carlos Mendez, out of the house, which allowed officers to shoot him dead.

Mendez fired on his victims across from Memorial Park on 320 North Orange Avenue, a polling place on Election Day 2016.

The incident displaced voters, with authorities telling residents to avoid the area into the evening. It also forced the temporary lockdown of nearby polling sites and schools. Among the victims were two women, one who had just left the polling place and another who was on her way in. One of the woman, Elida Dominguez, 66, of Azusa, died in 2018 due to complications related to the shooting, said Azusa police Sgt. Erin Coulter. Francis William Varney, 77, also of Azusa, was gunned down while approaching the shooter.

After his prepared remarks, Trump draped the medal, a blue ribbon attached to a gold, upside-down star, on each of the officers in a silent East Room with only the sound of cameras clicking and snapping. After the last officer was given his medal, applause filled the room.

Two officers were awarded medals posthumously, including one of the Dallas police officers killed by a lone gunman that interrupted a Black Lives Matter rally in 2016.

“An attack on police is an attack upon our entire nation,” Trump said when presenting the posthumous awards.