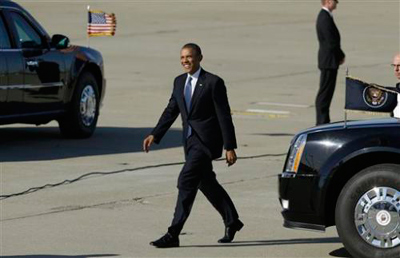 Los Angeles is expecting a double dose of presidential presence on Friday, along with the big traffic jams that typically accompany such visits.

President Barack Obama hits Santa Monica for a Democratic fundraiser at the home of media executive Peter Chernin, a big Democratic donor and one-time COO of News Corp. Former President Bill Clinton will then party it up downtown later in the day at the Celebrate L.A. event for outgoing Mayor Antonio Villaraigosa.

Air Force One is scheduled to touch down at Los Angeles International Airport at 10:35 a.m. and Obama's motorcade will then head up to the home of Chernin and his wife, Megan, for lunch. Tickets start at $10,000 per person, to raise money for the Democratic National Committee.

Obama is arriving from San Jose, where he raised money for the Democratic Senatorial Campaign Committee. After the L.A. fundraiser, he departs at 2:05 p.m. for Palm Springs to meet with Chinese President Xi Jinping at the estate of former Ambassador Walter Annenberg.

During Obama's first term, his first visit to Los Angeles tied up traffic severely around the city, resulting in what was dubbed Obamajam. Logistical issues were worked on for subsequent visits, leading to less serious congestion since then.

Clinton will be the featured guest at the Celebrate L.A. event at Grand Avenue Park adjacent to City Hall. The event is scheduled for 5 p.m. to 10 p.m., with Clinton expected to appear at 6:15 p.m. Clinton will be preceded by Ryan Seacrest at 6:10 p.m. and followed by Villaraigosa.

Opera star Placido Domingo is also scheduled to perform, as is comedian Wanda Sykes, as well as a mariachi band and a host of other musical acts.