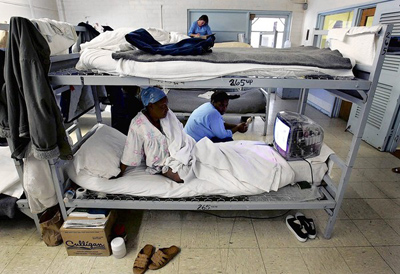 Inmates watch TV at the California Institution for Women in Chino, where inmate overcrowding has led to day rooms being converted to house prisoners. (Los Angeles Times / September 13, 2011)

Drastically redefining incarceration in California, prison officials are about to start releasing thousands of female inmates who have children to serve the remainder of their sentences at home.

The move, which could affect nearly half the women held in state facilities, will help California meet a court-imposed deadline to make space in its chronically overcrowded prisons. The policy could be extended to male inmates in the near future, administrators said Monday.

Mothers who were convicted of non-serious, non-sexual crimes - and have two years or less remaining on their sentences - could start going home as early as next week, prisons spokeswoman Dana Toyama said. The women would be required to wear GPS-enabled ankle bracelets and report to parole officers.

The program is "a step in breaking the intergenerational cycle of incarceration," state prisons Secretary Matthew Cate said, arguing that "family involvement is one of the biggest indicators of an inmate's rehabilitation."

But skeptics abound, including prosecutors and crime victims' advocates who opposed the idea as it worked its way through the Legislature last year.

"If they were such great mothers to begin with, they never would have committed the heinous crime that got them sent to state prison," said Harriet Salarno, founder of Sacramento-based Crime Victims United. In many cases, the children might be better off in foster care, Salarno said.

Reuniting families clearly was not the only consideration that led prison officials to opt for home incarceration. In May, the state lost a U.S. Supreme Court appeal of a ruling that had found California's prison overcrowding and the resulting lack of access to medical care amounted to cruel and unusual punishment.

Now state officials are struggling to meet a strict timeline that requires them to reduce the inmate population by more than 30,000 before July 2013. Gov. Jerry Brown's plan is to let thousands of low-level felons serving relatively short sentences do their time in county jails instead of state prisons.

If a significant number of the state's roughly 150,000 incarcerated men could qualify for the program as "primary caregivers" for their children, early release would go a long way toward easing overcrowding without putting additional strain on local lock-ups.

Prison officials Monday would not say how many male inmates they expected to qualify for home detention. But more than 4,000 of the state's roughly 9,500 female inmates could be eligible, Toyama said.

Since well over 90% of California inmates are men, it is easy to see why prison officials might want to expand the program, said Robert Oakes, legislative director for state Sen. Carol Liu (D-La Cañada Flintridge), who wrote the 2010 bill creating the policy. But that wasn't the original idea.

"In crafting the bill, her intent was to single out female inmates with children," Oakes said. But that could not be done because of a constitutional ban against gender-based discrimination. So the phrase "primary caregiver" was added to the bill.

Any conviction for a violent or sexual felony, or for any crime involving child abuse, would disqualify an inmate from taking part in the program. An escape attempt in the last 10 years, gang membership or an active restraining order also would rule an inmate out, state officials said.

The hope is that keeping kids with their parents, rather than in foster care, will "reduce the likelihood that inmates' children will embark on a life of crime," according to a 2010 memo from Liu's office. At the time the law was proposed, Liu's office said that about 19,000 children had mothers in California prisons in 2005, and that 79% of incarcerated mothers in the state never received visitors while they were behind bars.

While many of the inmates who win early release would serve their remaining sentences at home, others would go to drug treatment centers or halfway houses. All would be permitted to get jobs or go to school.

Corrections officials say they would notify victims and local law enforcement before sending inmates back to the community.

Brown has said that California would cover the costs of housing state inmates in county facilities. But local officials, many of whom already are struggling with crowded jails, worry that cash-strapped leaders in Sacramento might someday cut off the money.

L.A. County Dist. Atty. Steve Cooley, who has predicted Brown's prisoner realignment proposal would lead to a spike in crime, said Monday that he had not heard about the plan to release some mothers from state custody.

"If properly supported, with the proper amount of supervision, it's not a bad idea," Cooley said, noting that female offenders tend to be less violent than men. But, he added, "do I have any confidence in state prison officials? Not a whole lot."